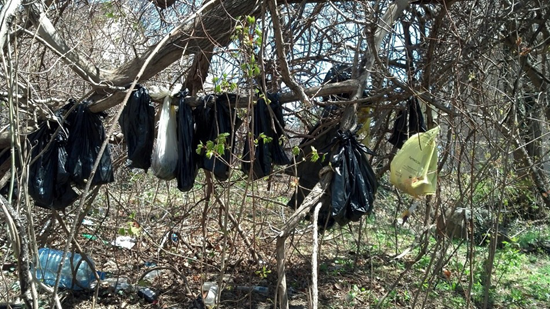 Yonkers, New York residents and city officials were horrified to find the bodies of at least two dozen dead cats hung from a tree near Overlook Terrace.  The cats, some of which were badly decomposed and hanging from tree limbs in black bags, were found by public works employees cleaning up trash in an abandoned lot in Yonkers, New York. The skull of each cat had been crushed before the body was placed in a plastic bag and tied to branches of the tree like ornaments. Investigators are searching for the cat slayer who they fear may be taking part in some sort of sick ritual.

“They were placed in small shopping bags, the plastic bags that you might get from an A&P or a ShopRite, and then they were hung from a tree.  Some were severely decomposed. We got a couple that were still fresh, within the last few weeks maybe. But we’re transporting them and are going to have some necropsies done. We’ll know more then.”

A city sanitation worker noted that a similar discovery had been made last year.

“Not as many, maybe two or three, but hanging in bags like this.”

“I’ve never confronted something like this. The sheer number and the fact that they were hanging, it is disturbing. Both the SPCA of Westchester and the Yonkers Police Department are highly motivated to find those who are responsible for this heinous act.  The investigation continues as we follow up leads and conduct interviews.”

Experts warned that whoever killed the cats could be capable of even greater crimes.  Animal cruelty and violence against people often go hand in hand.

“We all know a lot of serial killers had histories of animal abuse. “There is definitely a pathology.”

Police say they are looking at several suspects, both in and out of the neighborhood where the bodies of the cats were found.