Beginning in 1983, a series of crimes occurred in Vienna, Austria that Chancellor Franz Vranitzky called “the most brutal and gruesome crime in Austria’s history”. The crimes took place within the walls of the Lainz General Hospital and would prove so horrifying, the four nurses who committed them would come to be known as The Angels of Death. Together, for seven years between 1983 and 1989, they killed scores of people.

23-year-old Waltraud Wagner worked the graveyard shift at Lainz General Hospital, a picturesque facility fixed into the side of a hill next to the Vienna Woods. With over 2,000 staff members watching over patients, Lainz was the fourth largest medical facility in Vienna and considered one of the premiere hospitals in Austria.

Wagner worked in Pavilion V, an area of the hospital reserved for difficult cases – older patients who were unruly, mentally ill, or otherwise required special attention. It was in Pavilion V during the Spring of 1983 where a 77-year-old woman reportedly asked Wagner to end her life. Wagner complied, injecting a lethal dose of morphine into the woman’s arm. She would later confess that it was at that moment she discovered that holding the power of life and death in her hands was intoxicating. She began killing more patients.

Wagner recruits the Angels of Death

Wagner was charismatic, charming, and manipulative. Using her natural-born leadership abilities, she awakened the sadistic instincts in three other nurses by recruiting them to assist in her murderous spree. First to join the deadly alliance was 19-year-old Maria Gruber, a nursing school dropout and single mother. Next was 21-year-old Irene Leidolf, a married woman who sought any means available to stay away from home. The last nurse recruited was 43-year-old Stephanija Meyer, a divorced grandmother who had recently immigrated from Yugoslavia. Together the four women turned the nurses ward into their own lethal concentration camp.

The Angels of Death systematically murder elderly patients in Lainz

In the beginning, the Angels of Death killed patients with overdoses of morphine, insulin, and tranquilizers. The slightest annoyance from a patient could trigger their wrath – a patient that snored too loud, complained too often, soiled the bed, refused medication, or buzzed the nurse’s station for assistance would find their names placed on a kill list for extermination the following night. According to trial testimony, Wagner would loudly announce, “This one gets a ticket to God.”

Soon, killing the patients was not enough. The Angels of Death wanted to see their victims gasping for their lives. One nurse would hold the patient’s head while another pinched the victim’s nose. Then the patient’s tongue was held down with a stick and water poured into the victim’s mouth until they drowned. Although they admitted to enjoying the sight of the patient’s grievous struggle, there was a logic to their method too. Since the lungs of elderly patients frequently fill with water, the “water routine” would make it difficult to determine the true cause of death.

By 1988, five years after the murders began, the hospital suspected something was amiss and rumors surfaced that a killer was at large in Pavilion V. Workers began to call the area the “Death Pavilion”. In April 1989, the killings continued and Dr. Xavier Pesendorfer was suspended for failing to launch a timely investigation into the unusual number of deaths in his wing.

Nurses caught after bar patron overhears them bragging about their escapades 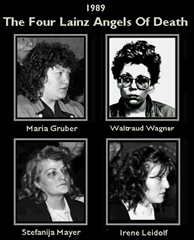 It was routine for the four women to stop by a local bar after work for a few drinks. Together they would cackle about the day’s events, a victim’s convulsive struggle to breathe or an unusual dying expression on a patient’s face.

In February 1989, a doctor inside the bar overhead the women giggling about their latest murder, an elderly woman named Julia Drapal. Julia had refused her medicine and paid the ultimate price for angering the nurses.

The doctor took his story to the police and the four nurses were arrested on April 7, 1989.

The Angels of Death trial

The Angels of Death trial was a simple affair. Together the four women confessed to 49 murders over six years. Wagner freely confessed to 39 of her own saying:

“The ones who got on my nerves were given a free bed with the good Lord.”

How many died at the hands of the Angels of Death?

Although the women confessed to 49 murders, Alois Stacher, head of Vienna’s Health Department, told reporters that Irene Leidolf had once told him she thought they had killed at least 100 elderly patients in Lainz. Today the unofficial count is believed to number at least 200 and possibly as high as 300.

The Angels of Death are released from prison

In Austria, life in prison is considered too harsh. Mayer and Gruber were released from prison after only a few years. In April 2008, Wagner and Leidolf were also released. The four women have since changed their names and are presumed to be living in Austria under aliases.