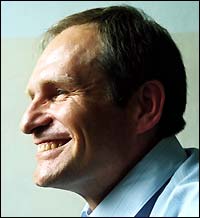 Armin Meiwes, a computer technician living in the German town of Rotenburg, was born December 1, 1961. He was described by neighbors as being “very childlike”, friendly, and a sensitive person. He was also called The Master Butcher and the Rotenburg Cannibal after he achieved international notoriety for killing and eating a voluntary victim whom he had found via an Internet forum dedicated to people who fantasized about cannibalism.

Meiwes’s childhood was far from normal. He lived alone with his mother until she died. His mother kept a close eye on Meiwes accompanying him on dates and even on Army training excursions. Meiwes described his childhood as “lonely” and he longed for a brother as a companion.

Meiwes began posting advertisements on The Cannibal Café website in 2001. The Cannibal Café website (now offline) contained forums where visitors could post their fantasies about cannibalism and being eaten. Meiwes used the screen name “Franky”, a fantasy friend he had invented during his lonely childhood. His message was simple. “Looking for well-built 20 to 30 year old to be slaughtered and then consumed.” Several people responded to his posts, some for play, some serious.

One respondent, Andreas from Regensburg Germany, spoke with Meiwes over the course of several email and forum posts. Meiwes explained that “he wanted me to pick him up in a cattle truck and slaughter him like a pig. I picked him up at the station and we went back to the butchery at my house. He wanted me to wear rubber boots, which he licked. I wrapped him in clingfilm ready for slaughtering but he backed out. So we just fooled around, drank beer, and ate pizza.” 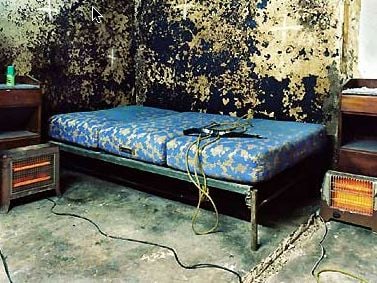 An Italian, who called himself Matteo, made such an outlandish proposition that even Meiwes himself backed out of the agreement. “Matteo wanted me to burn his testicles with a flame thrower. And he wanted me to hammer his body down with nails and pins while he was whipped to death. I found that a bit weird.”

Around Christmas, another man contacted Meiwes saying he could provide a young boy for Meiwes to kill and eat. The offer was taken back a few days later. Meiwes explained that the man “said the boy was being eaten at a Russian Orthodox feast. I tried his website after Christmas but there was no reply so perhaps it happened.” 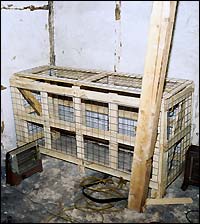 Another volunteer went to Meiwes home and was tied to a chair. The then changed his mind and together they sat on the couch watching Ocean’s Twelve.

As Meiwes received more and more responses from his Internet posts, he prepared for the big day when he would find a victim willing to allow Meiwes to kill him and eat his body. Meiwes prepared a “Slaughter Room” in a windowless upper level room of his house. Inside his Slaughter Room, Meiwes kept a bar bed and a custom cage for holding his victims. He also constructed meat hooks hanging from the ceiling of the room.

In February 2001, Meiwes and a man named Bernd Jurgen Brandes began conversing. Several exchanges on Internet forums were recorded before they could be removed by the forum owners.

VICTIM: “What will you do with my brain?”

MEIWES: “I’ll leave it, I don’t want to split your skull.”

VICTIM: “Better bury it, preferably in a cemetery; nobody notices skulls there. Or maybe pulverize it?”

MEIWES: “We have a nice small cemetery here.”

VICTIM: “You could use it as an ashtray.”

VICTIM: “Are you a smoker?”

MEIWES: “Yes, but my teeth are still pretty white.”

VICTIM: “That’s good, I smoke, too. I hope you like smoked meat.”

MEIWES: “Just bring yourself for breakfast.” 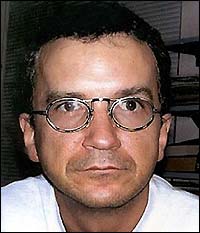 On March 9, 2001, Brandes met with Meiwes’s home. Meiwes gave Brandes alcohol, cold medicine, and several sleeping pills to help dull the pain. Brandes first insisted that Meiwes attempt to bite off his penis, a task which Meiwes attempted but was unable to do. He did manage to burst both of Brandes’s testicles by crushing them with his teeth.

Meiwes then cut off Brandes’s penis with a knife and bandaged the wound to slow the bleeding. The two men attempted to eat the penis together but failed. Brandes tried to eat his own penis but found it too tough and “chewy”. Meiwes then sautéed the penis in a frying pan sprinkled with salt, pepper, wine, and garlic, frying the appendage with fat he removed from Brandes’s body. Meiwes still found the penis difficult to eat so he chopped it up and fed it to his dog. 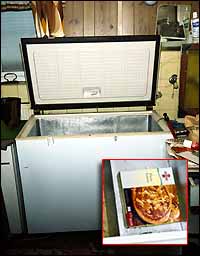 Meiwes then put Brandes into a warm bath in order to “bleed him out” before the slaughter began. Meiwes then read a Star Trek book for three hours while Brandes bled. At 4:15 AM, Meiwes took the weakened Brandes upstairs to the Slaughter Room. Meiwes completed the killing by stabbing Brandes repeatedly in the throat. He then hung Brandes’s body on a meat hook and began cutting chunks of flesh from his lifeless body. He recorded the entire episode on a two hour tape.

Meiwes stored the body parts in plastic bags in his freezer taking care to hide them under pizza boxes. He estimated that he gained 65 lbs. of meat from Brandes’s body. Meiwes even tried to grind Brandes’s bones into flour. Leftovers and teeth were buried in the garden behind his house. Meiwes then began consuming the meat every day over the course of the next 10 months.

After his meat supply began running low, Meiwes began trawling the Internet looking for a new victim. An Austrian college student in Innsbruck responded to one of Meiwes’s posts and was shocked to discover that what Meiwes was proposing was not a joke. Meiwes seriously wanted to eat him and provided disturbing details about his last victim. He immediately contacted the local authorities.

Meiwes was arrested in December 2002. Police searched the home and found body parts and the videotape of the killing. 15 lbs. of Brandes’s flesh remained in the freezer. On January 30, 2004, Meiwes was convicted of manslaughter and sentenced to 8 years in prison. The public was outraged.

In April 2005, the German court ordered a retrial after Prosecutors appealed Meiwes’ sentence. Finally, on May 10, 2006, a Frankfurt court convicted Meiwes of murder and sentenced him to life in prison.