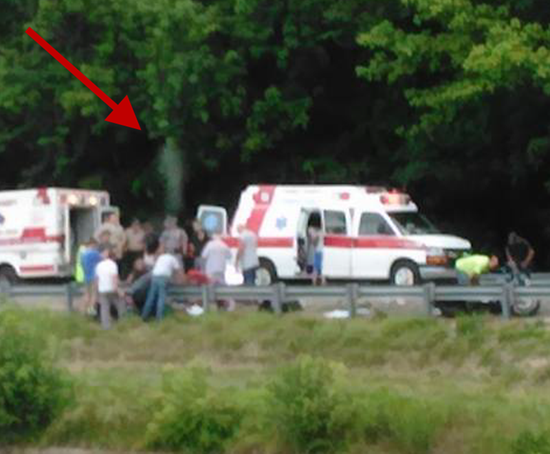 A photo from a motorcycle accident in Stanton, Kentucky is getting a lot of attention from paranormal researchers this week. The crash occurred on Tuesday, July 12, 2016 around 5:30 PM in Powell County, Kentucky. Unfortunately, the motorcyclist was gravely injured and pronounced dead at the hospital. Saul Vazquez witnessed the accident from the opposite lane and snapped a photo of paramedics working to revive the victim. He uploaded the photo to Facebook with this explanation:

“I took this picture just few minutes ago from the cab of my truck it was an accident between Campton and Stanton on the service road just off of the mountain parkway, zoom in and pay attention to the shadow just off the top of the state trooper hat. All I say is I hope everyone involved is okay!!”

The photo clearly shows a ghostly apparition, shaped like a man, hovering directly above the victim’s body. Many believe the photo captured the motorcycle driver’s spirit leaving his body.

Researchers say the photo does not appear to have been altered and smudges on the glass can be ruled out since Vazquez rolled down the passenger side window before taking the shot (even if rolled up the focal point would have been several hundred feet away).

Check out the zoomed version of the photo below. 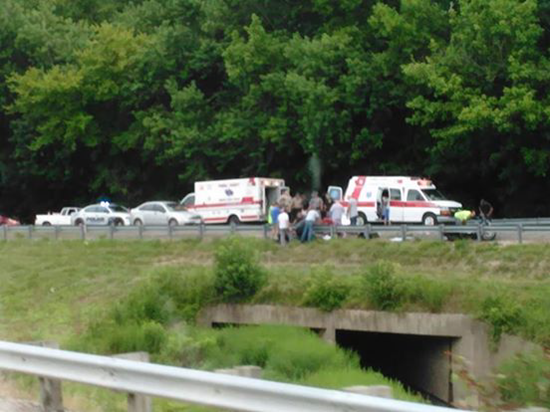