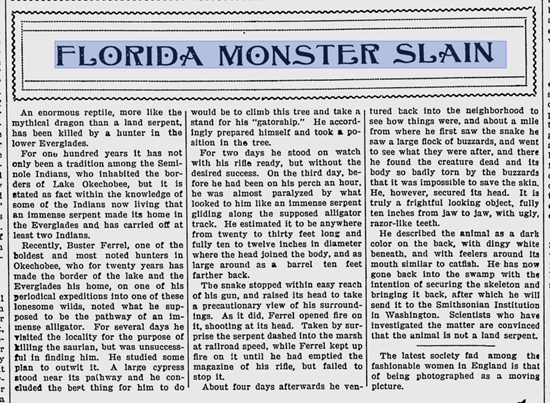 I ran across the following newspaper article from 1902.  It brought to mind stories of the Monster Mudwamp thought to at one time occupied the area around Lake Okeechobee.

An enormous reptile, more like the mythical dragon than a land serpent, has been killed by a hunter in the Lower-Everglades.

For one hundred years it has not only been a tradition among the Seminole Indians, who inhabited the borders of Lake Okeechobee, but it is stated as fact within the knowledge of some of the Indians now living that an immense serpent made its home in the Everglades and has carried off at least two Indians.

Recently, Buster Ferrel, one of the boldest and most noted hunters in Okeechobee, who for twenty years has made the border of the lake and the Everglades his home, on one of this periodical expeditions into one of these lonesome wilds, noted what he supposed to be the pathway of an immense alligator.  For several days he visited the locality for the purpose of killing the Saurian, but was unsuccessful in finding him.  He studied some plan to outwit it.  A large cypress stood near its pathway and he concluded the best thing for him to do would be to climb this tree and take a stand for his “gatorship.”  He accordingly prepared himself and took a position in the tree.

For two days he stood on watch with his rifle ready, but without the desired success.  On the third day, before he had been on his perch an hour, he was almost paralyzed by what looked to him like an immense serpent gliding along the supposed alligator track. He estimated it to be anywhere from twenty to thirty feet long and fully ten to twelve inches in diameter where the head joined the body, and as large around as a barrel ten feet farther back.

The snake stopped within easy reach of his gun, and raised its head to take a precautionary view of his surroundings.  As it did, Ferrel opened fire on it, shooting at its head.  Taken by surprise the serpent dashed into the marsh at railroad speed, while Ferrel kept up fire on it until he had emptied the magazine of his rifle, but failed to stop it.

About four days afterwards he ventured back into the neighborhood to see how things were, and about a mile from where he first saw the snake he saw a large flock of buzzards, and went to see what they were after, and there he found the creature dead and its body so badly torn by the buzzards that it was impossible to save the skin.  He, however, secured its head.  It is truly a frightful looking object, fully ten inches from jaw to jaw, with ugly, razor-like teeth.

He described the animal as a dark color on the back, with dingy white beneath, and with feelers around its mouth similar to catfish.  He has now gone back into the swamp with the intention of securing the skeleton and bringing it back, after which he will send it to the Smithsonian Institution in Washington.  Scientists who have investigated the matter are convinced that the animal is not a land serpent.