MS-13 Gang – the most violent and dangerous gang in the U.S.

The MS-13 gang, aka Mara Salvatrucha 13, is one of the most violent, dangerous gangs in the United States – and one of the most well-organized.  The MS-13 gang consist of cliques, or factions, located throughout the United States and is unique in that it retains is ties to its El Salvador counterparts.  With cliques in Washington DC, Oregon, Alaska, Arkansas, Texas, Nevada, Utah, Oklahoma, Illinois, Michigan, New York (large contingent in Long Island), Maryland, Virginia, Georgia, Florida, Canada, El Salvador, Guatemala, Mexico, and several other South American countries, MS-13 is truly “international” – and the first gang to be categorized by the United States as an “organized crime” entity.

How to recognize MS-13 gang members

MS-13 Gang members sport numerous tattoos on their bodies and faces and wear blue and white colors taken from the El Salvadoran flag.  Their membership is estimated to total over 36,000 in the Honduras alone.  Members typically range in age from 11 to 40 years old.  Their progressive increase in violent activities and careless disregard for the law (threats and attacks against law enforcement officials are common), has made them the most feared gang in the United States.  MS-13 criminal activities include drug smuggling, gun running, human trafficking, hits for hire, theft, drug sales, prostitution (including child prostitution) arson, and of course, strong arming local citizens.  Their wide-ranging activities and elevated status have even caught the eye of the FBI who recently initiated wide-scale raids against known and suspected gang members netting hundreds of arrests across the country.

MS-13’s penchant for violence is renowned.  Members often arrive in the United States with fighting skills gained from military training and are particularly adept with machetes.  In March 2004, the Maldon Institute, a Washington DC based think tank, released a report detailing the violent methods MS-13 used, including their increasingly typical (and disturbing) calling card.  MS-13 gangsters often leave behind dismembered corpses, complete with the decapitated head.  Typically a grim note is attached to the body.

In a recent Texas incident, a MS-13 gang member admitted that he had led the gang rape of a 24 year-old woman and then kicked her in the neck with such force that it killed her.  During questioning, the MS-13 member further acknowledged robbing and beating a small child in Houston and to stabbing an Alexander, Texas man three times in an attempt to kill him.  When asked if he thought murdering someone elevated his status within the gang he replied:

“Hell Yeah. The crazier you are known to be, the more respect the gang gives you. In my gang, my street name is “psycho”.

Like many gangs, MS-13 was named after “La Mara”, a street in El Salvador and “13th Street” in Los Angeles.  The gang originated in El Salvador and initially consisted of violent guerillas who fought in El Salvador’s civil war.  As the war neared its end, the gang moved its operations into the nearby Honduras.  In the Honduras, where membership topped 36,000, the gang rose to such power that the Honduran government instigated a crackdown on all gangs and even passed a law aimed specifically at busting up gangs and organized crime.  Code named “Strong Arm”, the Honduran government arrested more than 4,000 gang members in 2003, often solely because they wore tattoos or colors of known gangs.  Under Honduran law, gang members can receive up to 12 years in prison if they are a leader of a local clique and up to 9 years for simply being a member of a gang.

The recent Honduran gang law amendments enraged the MS-13 group.  They carried out their revenge in 2002 in the form of a slaughter that took place on the outskirts of the city of Tegucigalpa.  A car carrying two men armed with AK-47s and M-16 automatic weapons, cut off a public bus forcing it to stop.  The men quickly boarded the bus and opened fire on the passengers killing 28 people including 7 small children.  They left a slang-ridden message, written on a red poster board and weighted down with rocks, on the hood of the bus.  After MS-13 subsequently felt excessive pressure in Honduras, they migrated to Mexico.

MS-13’s rampage continued in Mexico and in early 2004, the Mexican government began a campaign to eradicate them.  Authorities arrested 300 gang members in response to what they called “a threat to National security”.  Arrestees were charged with drug trafficking and smuggling of firearms across Mexico and Central America.

MS-13 migrates to the United States

The Mara Salvatrucha gang moved into the Los Angeles area in the late 1980’s as immigrants from El Salvador began arriving in the city.  The early Los Angeles MS-13 gangs sought to protect El Salvadorian immigrants from the ruthless LA gangs.  As with many gangs who’s original intent was to protect their own, the gang soon began to prey upon the Salvadorian community themselves.  Once profits were recognized, Mara Salvatrucha cliques began to spread across the United States at an alarming rate.  By the 1990’s, MS-13’s reach had spread across the country and had planted its roots deep on the East Coast.  The early cliques located on the eastern coast were independent and not well organized.  In the early 2000’s, the gang hierarchy changed radically when leadership for these newly unified units, came from as far away as California and El Salvador.  Cells continued popping up all over the country. 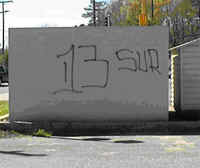 In Texas and the Rio Grande area, MS-13 has become particularly profitable.  U.S. and Mexican authorities acknowledge that MS-13 has been heavily involved in drug smuggling and human trafficking operations.  They estimate there are over 200 active cells (cells are groups of at least 20 members) operating in the states that border Mexico.  Rumors abound concerning high-profile terrorist organizations contacting MS-13 for assistance when crossing borders in these areas.

Membership in MS-13 has grown rapidly across the United States.  In Charlotte, North Carolina, membership is estimated to be 200+.  Police have implicated MS-13 in at least eleven murders in the Charlotte area in 2000 alone.  In northern Virginia and southern Maryland, around the Washington DC area, local authorities estimate MS-13 membership to be between 5,000 and 6,000 members – by far the largest gang in the area.  In July of 2003, the Washington DC area encountered three murders attributed to MS-13.  The first was the murder of a federal informant.  The second was the shooting death of a 17 year old boy.  The third was the death of a 16 year old boy who had both of his hands chopped off.

Members is MS-13 cells are often initiated by being “jumped in”.  In one Washington DC event, witnessed by a reporter, the inductee was an 11-year old boy – he sought membership in MS-13 so they would protect him from bullies in his neighborhood.  The rights of passage included placing the boy in a circle of gang members.  The five strongest members stepped inside the circle with the 11-year old boy.  As members began counting slowly to 13, the boy was beaten and kicked repeatedly until he reached the point of unconsciousness.  If he had been a girl, the rights of passage would have included being gang raped by six gang members.

While most gangs offer simple initiation rights, such as being “jumped in”, where you are beaten or punched for several minutes in order to “prove your worth”, for many MS-13 cells, initiations are more stringent.  In these cells, in order to join MS-13 you must first commit a violent act against someone else – either a beating, a rape, or a murder.

The MS-13 tell-tale body markings will typically include numerous body and facial tattoos containing the texts “MS”, “13”, or “18”.  Various symbols are used including dice, crossbones, or daggers.  Often the symbols signify the members area of specialization.  For instance, if a member has a tattoo of a grenade on his back it means that particular person specializes in explosives.

One of the defining factors of MS-13 is their absolute intolerance for anyone who informs the police of their activities.  Court papers in Nassau County detail recorded telephone conversations where a MS-13 member bragged how he had put a stop to a informant:

“I put one in the chest and three in the head.”

Once a member is brought in the gang, they are in for life.  They cannot act without the boss’s consent – they cannot kill without reason, cannot talk to the police, cannot skip gang meetings, nor can they leave the gang.  MS-13 has no tolerance for gang members who drop out.  In March of 2004, 16-year old Edgar Guzman, was brought before the US Bureau of Immigration and Customers Enforcement in Colorado.  He had entered the United States illegally, traveling from Guatemala on foot.  In Guatemala he had been a member of the MS-13 gang.  His sole reason for leaving his native country was to escape the gang life, live with his Aunt in Georgia, and begin school.  He begged authorities not to deport him.

On March 10, 2004, Edgar was released from jail and deported.  On March 20, 2004, ten days after he was deported, Edgar was found dead from multiple gunshot wounds.  He had hidden in his home for ten days and eventually left the confines of his house when his grandmother had unexpectedly died.  He barely made it five blocks from his home before members found him and delivered the punishment they deemed appropriate for his deserting the gang.  Death is almost always the only means of escaping the clutches of MS-13.

One of the reasons for MS-13’s success is their flexibility.  When they enter a new area where they are not known, they will wear their colors in a flashy display in order to promote intimidation.  Once the authorities catch wind of their presence, they will change their colors, carry their bandannas in their pocket, and change their markings to say, 76 or 67 (which total up to 13).

Flexible, organized, and highly violent – Mara Salvatrucha 13 has carved a niche in our society and dug in their heels, refusing to back down even from high profile authorities such as the Federal Police.

Human trafficking – one of the world’s fastest-growing crimes