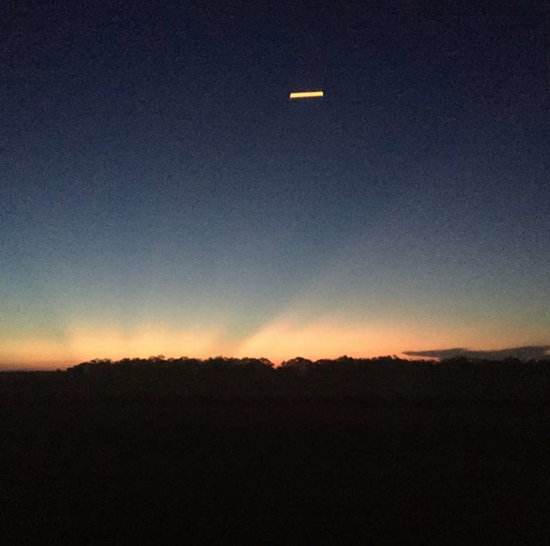 Local air traffic interfered with the transmission and Albuquerque Center was unable to respond. However, American Airlines later confirmed the report.

“Following a debrief with our Flight Crew and additional information received, we can confirm this radio transmission was from American Airlines Flight 2292 on Feb. 21. For any additional questions on this, we encourage you to reach out to the FBI.”

The FBI of course, refused to comment other than confirming that they were aware of the incident.

“While our policy is to neither confirm nor deny investigations, the FBI works continuously with our federal, state, local, and tribal partners to share intelligence and protect the public.”

“A pilot reported seeing an object over New Mexico shortly after noon local time on Sunday, Feb. 21, 2021. FAA air traffic controllers did not see any object in the area on their radarscopes.”

Missiles from the White Sands Missile Range have been ruled out since the reservation is about 400 miles from the area the the UFO sighting. In addition, White Sands denied they had done any testing on Sunday.

A pilot on a public forum explained why the sighting could not be crossing traffic or a missile that had “gone off the range”.

“Between 28,000′-40,000′ (FL280-FL400) aircraft are in RVSM (Reduced Vertical Separation Minimum) airspace, which means crossing traffic can be + or – 1,000′ from you. This airspace is highly controlled. And if another aircraft is transmitting on their Transponder code then you can see that aircraft on your TCAS (Traffic Collision system). For ATC controllers and pilots not to be able to see this UFO on any of their systems is very weird. And pilots never want to be the one to say UFO on radio.

Even if authorized to fly through military airspace the ATC controllers would say military airspace is cold. If missiles are being tested then a NOTAM (Notice to Airmen) would be issued and airspace closed off.
So I would say something was up there and passing by airlines.”

A similar sighting occurred in the area about a year ago.