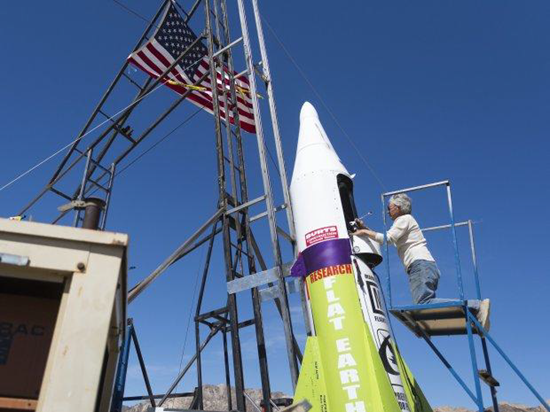 He’s a limo driver from California who calls himself a self-taught scientist. Others say he’s a crackpot. What we know for certain is that he’s no chicken. This week 61-year-old “Mad” Mike Hughes took the first step to proving the world if truly flat (more accurately, Frisbee-shaped). According to Mike, to verify the earth is flat, we must view it from space. And Mike doesn’t trust NASA’s version of events. Thus, he decided to build his own rocket (with the wondrous words “flat earth” emblazoned on the side).

“Do I believe the Earth is shaped like a Frisbee? I believe it is.  Do I know for sure? No. That’s why I want to go up in space.”

Mike constructed his steam-powered rocket, dubbed Liberty One, and a rocket ramp using old scaffolding and parts from a disowned mobile home. Using 70 gallons of water to take off, he blasted off from the floor of the Mojave Desert in California.  To everyone’s surprise, he reached a speed of over 350 MPH and an astonishing 1,875 feet above earth – not quite enough to prove the earth’s flatness but certainly high enough to show us Mike is no dummy when it comes to rocket construction. His safe descent to earth was accomplished by a pair of parachutes, one of which deployed just before the rocket touched down causing Mike a bit of “discomfort” (he was taken to the hospital in an ambulance and released).

Mike’s successful launch had been delayed several times earlier, mainly by jealous government officials aimed at stopping the mad scientists from launching his homemade rocket on federal or state lands.

Mike also claims that NASA astronauts such as John Glenn and Neil Armstrong were actors performing in front of a computer-generated image of a round globe. He next plans to run for governor of California. 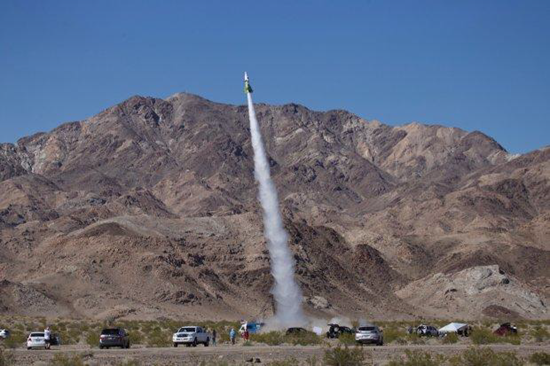