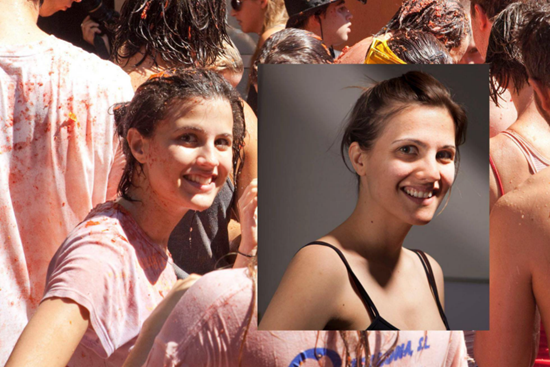 In 2010, while travelling via airplane from Mexico to Spain, a photo in a Mediterranean magazine caught a traveler’s eye. The article was about a tomato throwing festival (La Tomatina) held annually in Bunol, Spain. In the photo was a woman, shirt stained with tomato juice, smiling at the camera. The smiling girl was the man’s cousin – or so he thought.

He called his cousin to query how she came to be at the tomato throwing contest without letting any of the family know she was going. Thus began Eva Casado’s five-year journey to find her doppelganger.

“When he told me about the woman in the photo, I thought he was crazy because I had never gone to Tomatina and there’s no way the resemblance could be that uncanny… until I saw the photo that looked like an expert-level version of one of those find-the-seven-differences games.”

For comparison, Eva Casado took a photo of herself using similar lighting.  The results were startling. Casado and the unknown women at the tomato throwing contest look identical.

“I don’t know if it was the lighting, or the spots of tomato on her face, but the resemblance gave me chills.”

Casado has spent the past five years searching for the mysterious woman. She wonders if the resemblance is pure chance but suspects the woman could be an unknown twin sister.

“I discovered that there had been robberies of babies in the hospital where I was born. My mother is a twin, which also disturbs me; when I asked her about the Tomatina woman, she told me she was not asleep during childbirth and that she thought it was strange, but when I told her about the robberies at the hospital I saw a look in her eyes…”