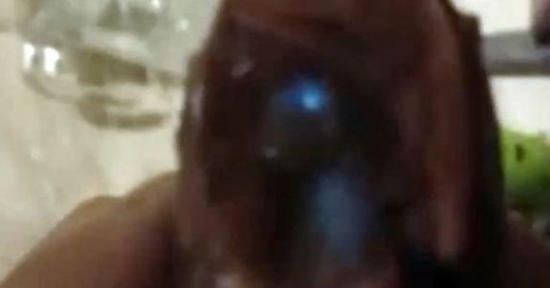 A woman in the eastern Kazakhstan city of Semey, purchased a fresh herring fish from her local market, brought it home, and began to fillet it when she noticed something odd. The fish’s insides glowed in the dark! According to Gulbarshin Kaydarova, inside the fish she found “strange growths” that gave off a bluish-green glowing light.

Fearing radiation, she threw the fish away but not before making a video that aired on Kazakhstan local news. Of course, local health officials sought to calm public fears and publicly announced that there was nothing to worry about and the fish was safe to eat.

Residents in the area (like residents near Fukushima, Japan) have a reason to be worried about bizarre animal mutations and strange growing growths in their food sources. In 1949 the Soviet atomic bomb program selected a site just west of the city as the location for its weapons testing program. For decades, the area was home to many of the brightest stars of Soviet weapons science program. However, Semey suffered serious environmental and health effects as a result of its atomic prosperity.  Nuclear fallout from the atmospheric tests and uncontrolled exposure of the workers, most of whom lived in the city, have given Semey and neighboring villages high rates of cancer, childhood leukemia, impotence, birth defects, and the occasional bizarre animal mutation.

Check out the video below. I’ve taken snippets from the local news cast video and post-processed to provide a better view of the odd, glowing growths found inside the herring fish.  Very strange!