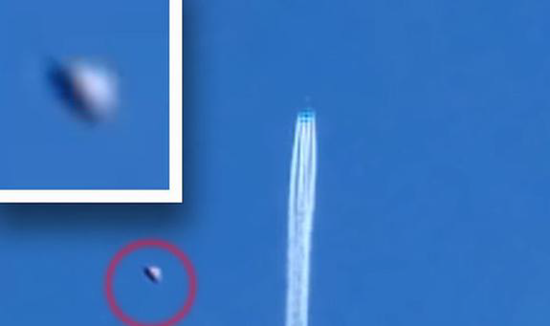 There was an interesting MUFON report this week, with photos (video of the same object appeared on YouTube shortly after the report was submitted to MUFON). The sighting took place on January 14, 2016 near El Cajon, California. The witness was filming a fighter jet’s contrails in the sky and at first, did not notice the high-speed object he inadvertently caught on video. According to the witness:

“I was outside at 11.30 AM on January 14 when I noticed a jet heading straight up and began to videotape it.  Later in the day when playing the video back, my girlfriend and I noticed a fast moving object near the jet that was not visible to the naked eye when recording.”

Still shots from the video show thick jet contrails with a clearly-defined gray, dome-shaped object flying nearby. The witness says the jet was flying upward but video of the airplane shows a horizontal flightpath and the close framing of the jet and its contrails make the direction of travel difficult to discern.  Assuming the jet were flying horizontal, the object appears to move underneath the jet, at an angle towards the ground, travelling at a high rate of speed.

I’m not crying “hoax’ on this one just yet. The video could have captured a falling meteor by chance but the uniformity and angle of the object when falling make that seem a bit unlikely. For now, it’s an unknown. 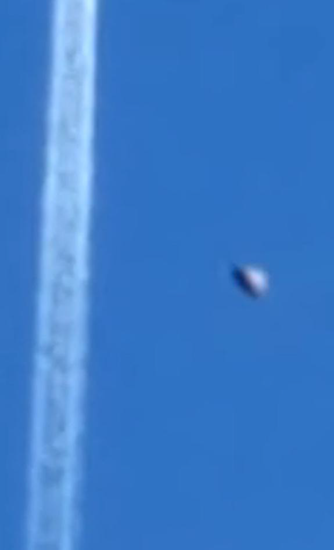