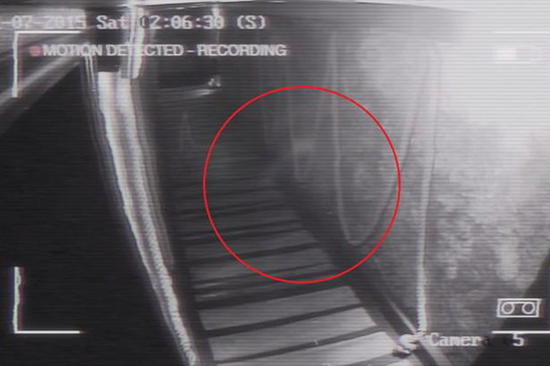 CCTV footage of a ghostly pirate apparition moving through a bar in Warrington (Cheshire, England) is causing a stir in the ghost community. The CCTV video was shot in the Dreamwater Lounge in the city centre area of Warrington. Simon Ellison, owner of the shipwreck-themed wine bar, says the footage is legit although the version that leaked online was edited to include segments of daytime customers and a rainy night – which only add to the spookiness effect.

In the security video, you will see a “camera movement” indicator come on followed by a white orb of light moving around on a rope bridge. Suddenly the camera begins to shake while a faint white figure appears at the bottom of the frame and glides down the bridge before disappearing. The figure appears to be wearing some sort of military uniform and an old-fashioned pirate cap on its head.

Ellison explained that there are several theories going around.

“I am not sure what the moving figure is. Everyone has different ideas. Some say it is a woman, I have even seen people say they think it is someone on a horse. That makes me laugh because if you could see that bridge you would know you could never get a horse down there.”

Some are calling the post-edited video the “eeriest paranormal footage ever captured” while investigators from both the United States and Australia are requesting access to the structure to conduct further investigations.

As the video begins, you will see daylight scenes of customers walking down a set of stairs and milling around at the bottom of the staircase.  Then a storm will roll in and the lights will go out.  A few moments of dark, rainy camera footage are shown before the scene shifts to the rope bridge hallway of the Dreamwater Lounge.  Toward the top-left of the camera frame you will see a small white orb dance around (I have added post-processing zooms of the orb later in the video).  Then, approaching from the bottom-right side of the frame, a faint white figure will slowly glide into the frame and travel down the hallway before disappearing at the end of the hallway.  Check out the eerie video below.