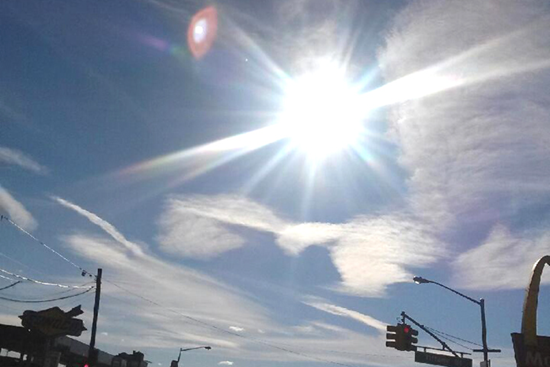 For the second time in twelve months, residents of New York City reacted in panic after seeing a UFO streak across the skies above the Bronx. Authorities say they received several phone calls from citizens on April 25, 2015 reporting a “flying saucer” moving swiftly over East 149th Street and Bruckner Expressway.

Juan Marrero was on the roof of his building in Hunts Point (a neighborhood in South Bronx) tending to his pigeons when he saw two bright orbs speed across the sky.

“I look up and see this fireball, ‘Whoosh!’ and then another, ‘Whoosh!’ From one side of the sky to the other, too fast for an airplane.”

25-year-old Andres Morales also spotted the streaking objects. He grabbed his smartphone and began taking pictures including the one above which shows a disc-shaped white orb surrounded in an erie reddish glow. He told the New York Post:

“I stuck my hand out the car window and snapped like crazy. I don’t know what it was but it was moving crazy fast.”

A New York Times reporter called the police to ask about the reports and received a subtle but cold reply. He later tweeted:

“A lot of people have called 911 tonight to report a UFO in the Bronx. Called NYPD, they said if I asked about it “you’ll hear a dial tone.”

Residents of the Bronx area reported similar sightings in May 2014 and also in 2011. Descriptions for the object sighted last summer bore an eerie similarity to this week’s sighting. A witness to the 2014 event told reporters at the time:

“[It] just sort of hovered, stationary, and then shot off in the blink of an eye.”