Hong Kong smuggler caught with 94 iPhones taped to his body 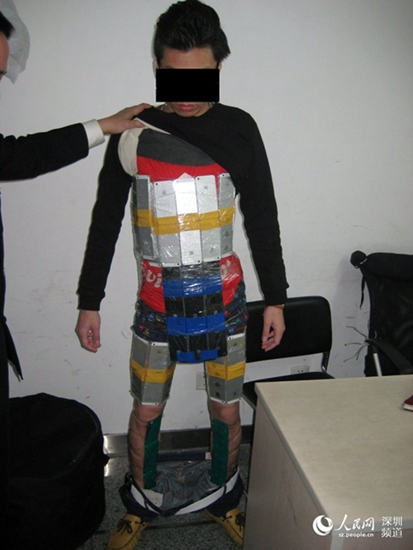 On January 11, an wily immigrant from Hong Kong drew officials’ suspicion after they noticed the man walking funny, as if he had joint stiffness or sore muscles. They noted that the man, who was attempting to enter China’s border city of Shenzhen from the Futian Port, looked like he was weighed down even though he was only holding two plastic bags in his hands. They directed the man through the airport-style metal detector and to nobody’s surprise, the alarms sounded.

The man was searched and it was discovered that underneath his clothes, his body was covered with tape and plastic bags. Pulling back the plastic wrapping on the man’s chest, stomach, back, legs, and groin, officials found 94 iPhones taped to his body. The stash contained iPhone 6, 6+, and older iPhone5 handsets.

Despite being manufactured in mainland China, iPhones (and many other electronic and/or luxury items) are much cheaper in Hong Kong than they are in China.

Check out the crazy (and funny) pictures below.