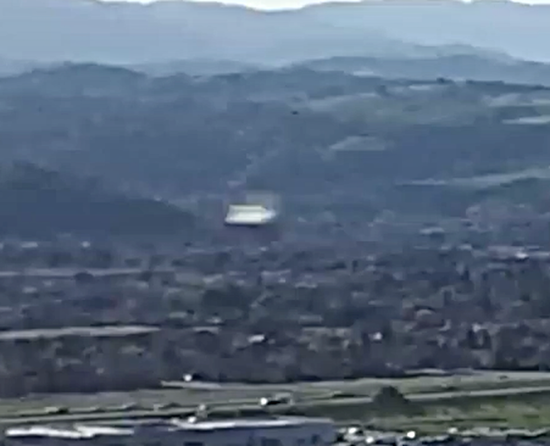 YouTube user 1darmino shared a 4-second video on March 7, 2015 that he shot using a 4K camera mounted on a DJI Inspire 1 commercial drone. The drone was flying at a height of about 250 feet filming the terrain over Silicon Valley, California when something highly unusual zips into the frame. “Zips” may be an understatement. The object is flying extremely fast – so fast you can barely see it in the normal-speed video.

In the video below, keep your eye on the center part of the video near the base of the mountain. Flying from right to left, a high-speed white UFO comes into view from the distance and in the blink of an eye, flies out of the frame. The object flew so fast, 1darmino had no time to pan the video in an attempt to follow it.  I’ve added post-processing zooms, picture-in-picture, and slo-mo to aid in visualization.

The videographer is looking for assistance in identifying the UFO. According to his post on a drone website:

“I have no idea what this is, maybe a bug, hummingbird, reflection or alien space craft! The only thing I know for sure is that I did nothing that would cause this. You can analyze it better if go frame by frame. Any other ideas of what it might be?”

It’s apparent from the video that the object is moving far faster than the speed of sound but there were no reports of a sonic boom over Silicon Valley on the day the video was shot (or any other day for that matter).