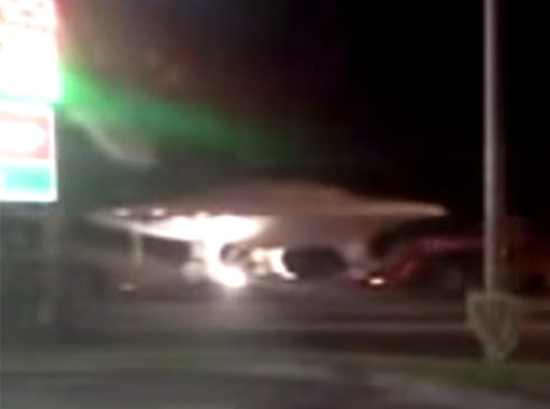 In the first section of the video, the videographer apparently placed his cellphone on the dashboard of his parked car in order to secretly film the passing convoy. In the second section, he turned the cellphone sideway, possibly to film out a side window or under his arm. I’ve corrected (rotated) that section of the video to enhance viewing.

It’s clear that whatever is being transported is military in nature – you can see a convoy of vehicles, including guide-trucks and law enforcement cars, escorting the craft past a gas station. It is speculated that the disc-shaped object could be the new X-47B unmanned drone that is being developed by Northrop Grumman (although in the past the craft has been triangular in shape). Others have speculated it could be a museum exhibit or maybe a captured UFO. Whatever it is, given it was being moved around near Area 51 in the middle of the night, it’s definitely not something the government is keen on being filmed.

UFO being transported in military convoy near Area 51