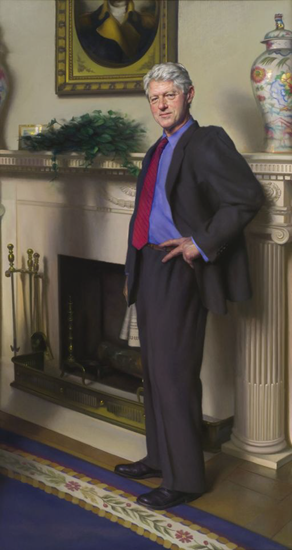 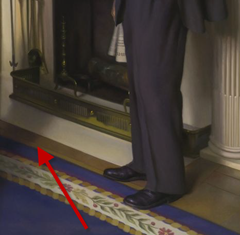 It hangs in Smithsonian Institution’s National Portrait Gallery in Washington, D.C. and word has it that the Clinton’s absolutely hate it and want it removed. The Clinton’s dislike of the portrait isn’t because of Bill Clinton’s awkward pose but rather – because the celebrated artist snuck a representation of Monica Lewinsky’s famous semen-stained dress in the background of the painting.

If you recall the Clinton/Lewinsky sex scandal you will remember that a semen stain on Lewinsky’s blue GAP dress was used as evidence to link Clinton to the affair with Lewinsky during his presidency. According to renowned Pennsylvania artist Nelson Shanks, while painting the famous portrait, he could not get the Lewinsky scandal out of his mind. To help ease his lack of concentration, the artist set up a mannequin, clad in a blue dress, out of view but in a position to cast its shadow on the left-side of the fireplace mantle. The mannequin was removed when President Clinton arrived to pose for the portrait and put back into place when he was absent allowing the artist to capture the shadow of the scandalous dress in the historic painting without revealing his hidden intentions.

In the picture above, you can see a vague but unexpected shadow falling over the fireplace tools. According to Shanks, the dress’s shadow served an additional purpose:

“It is a bit of a metaphor in that it represents a shadow on the office he held, or on him.”

Nelson Shanks has worked with everyone from Ronald Reagan to Princess Diana and painted the 42nd president at a New York City studio in 2005 (the background wall and fireplace are a replica that the artist constructed in his studio).  The portrait caused a bit of a stir when it was released in 2006 after viewers noticed that Clinton was not wearing his wedding ring.  According to Shanks, the Clinton’s have been lobbying the National Portrait Gallery to remove the painting from the gallery.