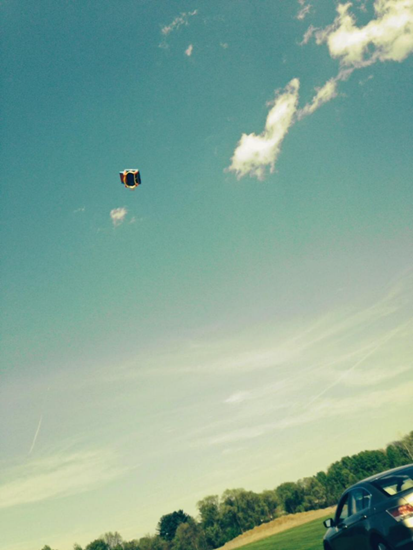 Three upstate New York children were inside a bounce house Monday afternoon when a gust of wind launched the house high into the air. Horrified witnesses say the bounce house rose 50-feet into the air but photographs of the incident suggest the playhouse rose at least 100-foot into the sky and possibly higher. The three youngsters were seriously injured when they were dumped from the house while it was rising into the air.

The bounce house lifted off at 3:20 PM on 5/12/2014 outside 22 Ferry Blvd. in South Glens Falls, New York. Two boys, age 5 and 6, suffered serious injuries after falling nearly two stories from the house.  The 5-year-old boy suffered from facial injuries and two broken arms as he was dumped to the asphalt while the older boy experienced a traumatic head injury after his head slammed into a parked car after falling from the playhouse. The oldest child, a 10-year-old girl, fell at a much lower distance from the ground and suffered minor scrapes.  All of the children are in stable condition at a local hospital.

According to witnesses, the gust of wind “picked the structure up and spun it around as if it was a small tornado.”  After the children tumbled from the flying playhouse, the inflatable playpen continued to float through the air, clearing a patch of woods before finally landing in a field behind a middle school about three blocks away. Witnesses say the playhouse was secured to the ground using ropes and stakes before the children were allowed inside to play but the wind (meteorologists suspect a “dust devil”) was strong enough to rip the stakes out of the ground sending the bounce house sailing across the sky.

According to USA Today, bounce houses carried off by gusts of wind is not unusual.

At least 10 inflatables around the country in 2011 have been toppled by winds or collapsed under too much weight, injuring more than 40 people, according to www.rideccidents.com, a website that tracks amusement ride accidents.  One incident in New York that year left 13 in the hospital, according to the Associated Press. In Arizona, two accidents in the Tucson area in 2011 injured four children, including sisters who were inside a bounce house in February when wind bursts tossed the ride onto a roof. In April, a boy and a girl were in bounce houses that were blown across three lanes of traffic, the AP reported.