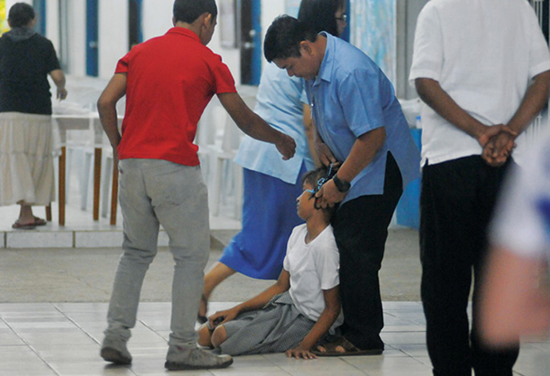 Nearly three-dozen students at a school in the Philippines were taken to a local exorcist after the students began acting strangely, some collapsing on the floor and convulsing during classes. Two sisters at the school explained that they had been possessed by spirits believed to have been linked to two mango trees that had been cut down to build the school.

Officials at the Toon Integrated School in a village near Cebu City, Philippines told reporters that thirty five students began collapsing around 3:00 PM. After students began reporting that they were “possessed by evil spirits”, teachers called the nearby Mary Help of Christians Parish which sent Reverend Nicolas Ramos to the facility. Ramos doused the children with holy water and noted that about a dozen students reacted violently to his actions. Those students were transferred to Mary’s Little Children Community where Monseigneur Frederick Kriekenbeek, the official exorcist of the Archdioceses of Cebu, performed exorcisms on them.

The spokesperson of the Archdiocese of Cebu reminded parents to guide their children carefully, especially regarding the things they read and watch on TV.

“It is very important for parents to exercise caution, for them to monitor their children on the things that they read and watch. It could start from simply reading about their in books or watching videos online but could reach to the point of them practicing rituals or something like that. It is not uncommon for the young to be curious on these things. But these are not intended for them as this can trigger and become portal for evil to enter. We don’t encourage that children watch or read these without adult supervision.”