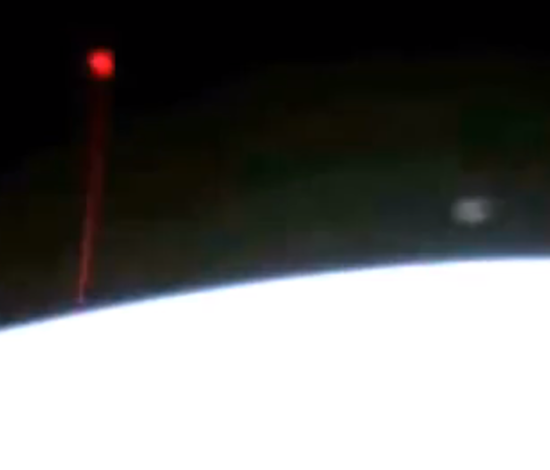 NASA video cams captured an intriguing, and bizarre, occurrence on December 5, 2014 – a mysterious beam of red light shooting from an unknown red sphere down to Earth (see screenshot above). The red light beam occurred around 9:20 AM GMT and was captured by a live webcam that’s placed on the outside of the International Space Station.  And this isn’t the first time the strange beam of light was spotted in space…

The source of the beam of light is unknown but it’s obviously not a natural occurrence. One viewer thinks it’s NASA using a red laser to “mess with our heads” wile some have suggested it is a UFO probing or communicating with something or someone on earth.  Others however, think the video may have captured the testing of a new space-based laser weapon (property of either the United States or China).

Thus far eager eyes have spotted the light beam at least twice – the latest sighting on December 5 and an earlier occurrence on November 21, 2014.  In both instances, the red flash/beam erupts near another unidentified white orb (near the center of the video frame).

Check out the video below. Watch carefully – it flashes quickly near the top, left-hand side of the video. We’ve also included slo-mo post processing and a zoom to make it easier to see as well as the video from the earlier November 2014 occurrence of the light.