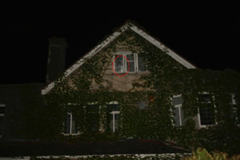 Chelle Morris was on a ghost-hunting expedition with the paranormal research group, Swindon Ghosthunters, at the haunted Langsmeade House in Oxford when she snapped the eerie picture above. Morris says she believes the picture captured the renowned ghost of the Langsmeade House Nanny peering from a second story window. At the time the picture was taken, the Langsmeade House was said to be empty.  Legend says the ghost is the remnant of a nanny who was riddled with guilt over a child who died in her care after falling out of a tree on the property.  According to Morris (edited for clarity):

“We were investigating the grounds and heading towards the house.  I looked up and there were flashing lights on the second floor…  I decided to take photos and this was the result.  We radioed the other team members and they were all outside so we knew it wasn’t them.”

Ghostly spirits at the Langsmeade House are nothing new. Guests staying at the bed and breakfast claimed to have heard the sounds of heavy footsteps walking down the hallways during the middle of the night. A few guests have seen a young boy in old fashioned clothing dart across the corridor on the first floor (it is believed two boys who lived on the property died under tragic circumstances in the early 1930’s). Others have reported an old army officer standing silently next to their bed, lost in thought. During their excursion into the home, Chelle’s husband and Swindon Ghosthunters operator John Williams says he heard something whisper in his ear, “I fell out of a tree.”

The Langsmeade House, located in Oxfordshire, United Kingdom, was built in 1924 by the owner of the Singer sewing machine factory. Previous occupants include Band Leader Jack Hilton, comedian Arthur Askey, World Motorcycle Champion Mike Hailwood, and Winston Churchill. Lawrence of Arabia (T.E. Lawrence) was reported to have stayed with General Fuller and his Russian princess in the home until a few days before his mysterious death.