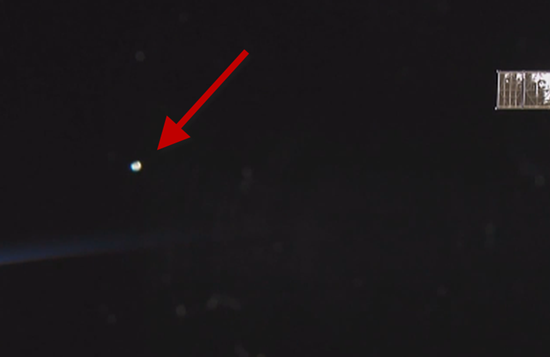 The International Space Station’s (ISS) live stream has once again captured what appears to be a spherical-shaped UFO within range of the orbiting space station. The silhouette of the earth can be seen in the lower left hand side of the frame. Approaching from the left-hand side, you will see a large, lighted orb slowly move towards the camera, sit stationary for a few moments, and then slowly fade from view. The live stream, which was recorded on November 3, 2014, then cuts to a blue screen with a message saying the stream has been stopped due to a change in cameras or a signal interruption.

Skeptics have suggested the UFO is a smudge on the ISS camera lens but even considering the orbital speed of the object, would not account for the change in lighting. The 70 second duration of the UFO’s appearance indicates the spherical object was not the moon and it is not believed that any other country has the technology required to secretly observe ISS.

There have been a series of UFO’s captured in ISS video during the month of October 2014. Two live streaming incidents on October 6 and 21 showed what appeared to be elliptical cigar-shaped UFOs in close proximity to the ISS. Further incidents on October 22 and 25 showed spherical UFOs similar to the object captured in the November 3 video. The surge of activity around ISS certainly begs the question, “Is someone or something monitoring the International Space Station from space?”