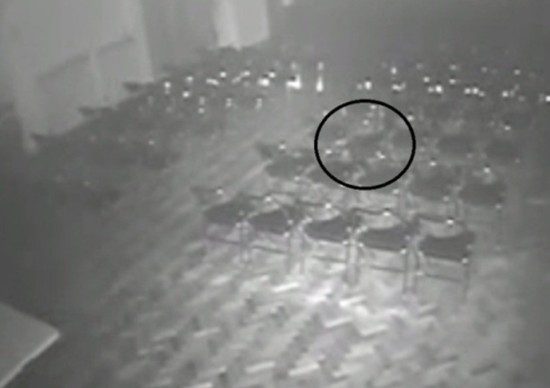 CCTV video footage taken from inside the Brookside Theatre in Romford, Essex, England during the middle of the night appears to show a chair and table moving by themselves. The security footage was shot around 4:15 AM on July 27, 2014. Theater manager Jai Sepple decided to review the security footage after he arrived inside the theater on Sunday morning and noticed one of the chairs had been moved out of position during the night.  Sepple was the last to leave the theater on Saturday night and had carefully straightened all the chairs before heading home.  Sepple was stunned at what he found on the security video.

“We’ve had so many strange things happen over the years but this has to be the freakiest. When I looked back at the CCTV, I didn’t know whether to laugh or cry!”

Check out the video below (edited for brevity and zoomed/post processed to enhance view) and notice the chair in the third row suddenly slides backward. A little later in the video, the table located in the lower, left-hand side of the frame will also slide partially of view.

Ironically, just hours before the incident, psychic medium Roy Roberts had conducted a show and reading at the old theater. He told the Romford Recorder:

“It’s phenomenal. I’ve never been so excited about the possibility of ghosts before. This is the best footage I’ve ever seen of ghosts in action. When I was doing the reading, I did feel a strong sense but just didn’t know what it was. This is unbelievable.”

The Brookside theatre, constructed in 1953, previously served as the Romford War Memorial Social Club, to commemorate serving personnel who lost their lives in World War Two.