Bizarre cloud formation in Australia prompts citizens to wonder: Has the end drawn near? 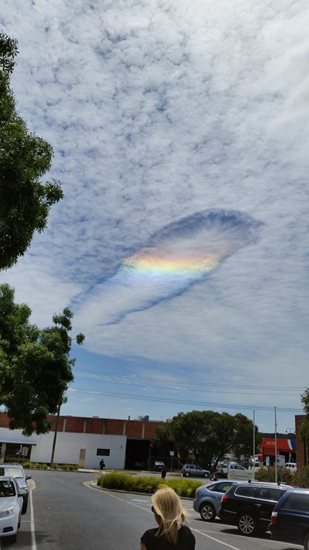 It’s a rare weather phenomena called a “fallstreak hole” that occurs when the water temperature inside a cloud drops to freezing but the water vapor itself cannot freeze because there are not enough “ice nucleation particles” – and man, does it look freaky. Last month citizens of Wonthaggi, Australia (100 miles southeast of Melbourne) were treated to the spectacular sight of a fallstreak hole (also called a fallstreak cloud or punch hole cloud) which had many worried about what was occurring in the skies above them.

The strange cloud formation, which looks like an alien ship or portal to another dimension, occurred on November 5, 2014 above the seaside town of Wonthaggi. Panicked residents (thankfully) snapped photos and called local radio stations seeking an explanation for the odd sight.  Others wondering if the end of the world had drawn near, queried friends and family on social networks.

“Any idea what was going on in the sky over wonthaggi this afternoon?” – @TimSmithYV

While the Bureau of Meteorology does not have an official record of how many times fallstreak holes form in Australia, a similar cloud formation was spotted in October 2014, appearing like a watery UFO in Perth, Australia. Fallstreak holes may also form when an aircraft flies through the area, cooling the air in the clouds and causing them to expand. When there are enough high clouds around, the formation will persist long after the aircraft has left.

Check out more cool pictures of the bizarre cloud formation in the pictorial below (click picture for expanded view).