Military confirm that large, unidentified object has crashed in Tunisia desert (impact site not yet identified) 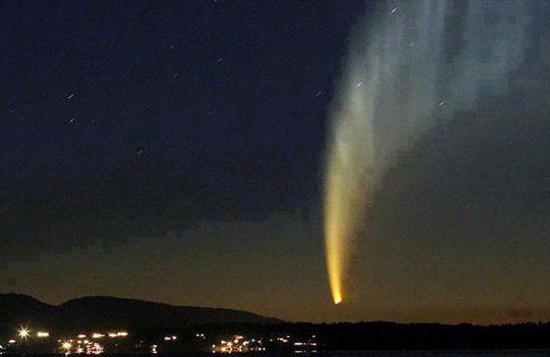 Authorities are reporting that a large, unidentified object has crashed in a desert in Tunisia. The space object, which panicked citizens were told was a  meteorite, fell yesterday (Sunday, September 15, 2013) in a rural desert area of the Tataouine governorate, near the town of Remada in southern Tunisia. According to Radio Tataouine, witnesses reported seeing a bright object falling from the sky shortly after 8:00 PM local time, and then exploding on the ground. Local residents reported hearing three deafeningly loud explosions during the impact event. The fiery object was reportedly visible from the city of Tataouine, the governorate’s capital, and crashed in an area designated a military buffer zone.

No injuries or damage have been reported and local residents were calmed by military and national guard resources who were rushed into the area to identify the impact site and confirmed that something had crashed in the desert.

It is interesting to note that the American Meteor Society has recorded a significant uptick in “events” during the past ten years with 2013 looking to be a record year. The table below shows the total number of reported “events” for each year since 2005.