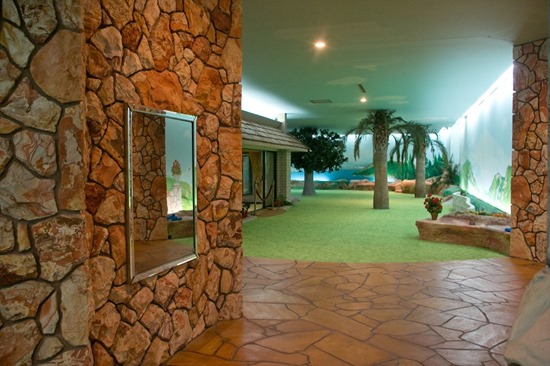 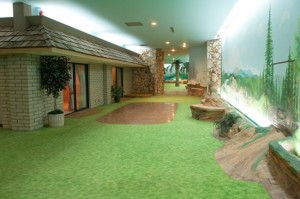 Las Vegas is fertile breeding ground for the strange. Now that this bizarre, personal Cold War bunker has hit the residential market, you can add this creepy Hobbit-like underground home to your list of places to see on your next visit to Sin City. At this sprawling home for sale at 3970 Spencer Street, just east of the Las Vegas Strip, you can golf, barbecue, swim, relax in a hot tub, dance under a starry sky and make breakfast while gazing at the mountains – all while 26 feet underground.

The unusual home is a 5,000 square foot subterranean villa situated inside a 15,2000 square-foot bunker. It was built in the 1971 (and still retains a 70’s Brady Bunch décor) and features a heated pool, four-hole putting green, two Jacuzzis, sauna, bar, dance floor, and a small stage enveloped within 13″ concrete walls (it is designed to withstand a nuclear blast) decorated to mimic the great outdoors. If the thought of living in a dark, dank basement deters you, never fear.  The home makes use of a sky control system that lets the occupants adjust the lighting mode. Light switches labeled “Sunset,” “Day,” “Dusk” and “Night” simulate those settings by dimming or brightening lights and stars on the ceiling, which is painted sky blue with white clouds.

The home is located under a 1-acre plot of land. When it was built, the only signs of the house on the surface were an unusual number of ground-mounted air-conditioning units camouflaged by clusters of large rocks. Its two emergency exist are scattered around the property – one looks like a cave and the other like a small work shed. Since its construction, another home has been built above ground (for those who do NOT fear a zombie apocalypse) and is included in the sale price.

When visitors reach the “ground level” of the below ground house, they’re in the front yard of the house looking at the entrance to the 40-foot-by-46-foot room. To the left are the dance floor and the stage. The house also has a laundry room, a full kitchen, a fireplace, a generator, fake trees, fake flowers, two elevators, fire alarm bells, smoke detectors, an intercom system and several large pantries. Oh, and it has a four-car garage.

The home was built in 1971 by wealthy businessman Girard B. “Jerry” Henderson, an entrepreneur whose company, Underground World Home Inc., specialized in Cold War bunker homes The house on Spencer Street is the second underground house Henderson had constructed for himself by Texas building contractors Kenneth and Jay Swayze. The first home was near Boulder, Colorado located on a remote 320-acre mountain property. Rather than building a shelter to duck into when the air raid sirens blew, the Henderson’s lived underground full time. There is plenty of storage space and shelving so the couple could hole up for a year or more if they had to.

Mr. Henderson died in 1983 followed by his wife in 1988. At that time, the home passed to a relative. In 2012, the home was foreclosed on after a buyer who had purchased it in 2005 for $2 million, couldn’t keep up with mortgage payments. Now, it’s been repossessed by the bank and can be yours for a paltry $1.7 million. About a dozen prospective buyers have toured the site since last summer, including one man who flew in from Hawaii just to see it (he was considering turning the home into a paid tourist attraction).

Check out the pictorial of the unusual underground home below the break.