The Battle of Los Angeles

Few are aware that 70 years ago there was a historic and widely documented air battle in the Los Angeles skies against an object that to this day, remains unidentified.  Known as The Battle of Los Angeles or The Battle of LA, the true life event was the basis for a 2011 movie of the same name. 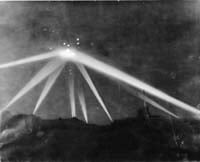 On the night of February 24/25, 1942, less than three months after the United States entered World War II, an extraordinary event occurred in the skies of southern California. Known as the Battle of Los Angeles (or The Great Los Angeles Air Raid or The Battle of L.A.), a large number of flares, fires, blinking lights, and a huge UFO appeared in the skies of Los Angeles. As warning sirens sounded the alert, the United States military fought against the objects for several hours. After the dust settled, the military could give no explanation of the “enemy” combatants they had just battled even though hundreds of people witnessed the event and the mysterious object that floated across the Los Angeles sky.

An Attack is imminent

On February 24, naval intelligence put forth the warning that an attack was imminent. At 7:18 PM (Pacific time), just 2 hours later, the alert was lifted and everyone relaxed. But just after midnight on February 25, radars picked up an unidentified target 120 miles west of Los Angeles. At 2:15 AM, antiaircraft batteries were put on “green alert”. They were ready to fire. The target approached L.A. and a few minutes later a blackout was ordered by the 14th Interceptor Command. As Los Angeles went dark, the phone lines were flooded with calls from weary citizens who had seen something in the sky that they could not explain. Reports of “enemy planes” arrived in droves even as the object on radar vanished from the aircraft controllers screens. Other calls came in describing a large “hovering” UFO slowly gliding from Culver City towards Santa Monica.

Objects reported in the skies of Los Angeles

The city was blacked out from 2:25 AM until 7:21 AM. The blackout was in effect from Los Angeles to the Mexican border. At 2:43 AM, a large number of planes were reported near Long Beach. At 3:08 AM, radio stations were ordered off the air. Simultaneously, an artillery colonel reported about 25 planes at 12,000 feet over Los Angeles. In addition, a large glowing red object was reported over Santa Monica. Four batteries of anti-aircraft artillery, including the 37th Coast Artillery Brigade, opened fire and the skies of Los Angeles were lit up as 12.8 pound shells were launched into the air. “The air over Los Angeles erupted like a volcano”.

Details on the mysterious objects arrive

Searchlights began scanning the skies over Los Angeles. More reports of “swarms” of planes came in. Sometimes the reports described the objects as balloons and sometimes they were reported as “lights”. Altitudes of the objects ranged from 1,000 feet to over 20,000 feet. The speed of the objects varied too with some being described as moving very slow while others were described as moving over 200 miles per hour. There were even reports of four aircraft being downed and in smothered in flames at a Hollywood intersection.

Residents of the City climbed on roofs and stood in their yards watching the battle. Many described (and photographic evidence exists, see photo above) seeing a large hovering UFO with several military spotlights targeting it at once. Reports indicated that the object was unphased by the barrage of artillery that bombarded it. According to newspaper reports, eyewitnesses described the sight of the UFO like a “surreal, hanging, magic lantern.”

“Katie”, who was Air Raid Warden for the LA area, received a call from her Air Raid Supervisor. He notified her of the alert and asked if she could see anything over or near her home. She quickly rushed outside and reported, “it was huge! It was just enormous! And it was practically right over my house. I had never seen anything like it in my life!” she said. “It was just hovering there in the sky and hardly moving at all. It was a lovely pale orange and about the most beautiful thing you’ve ever seen. I could see it perfectly because it was very close. It was big!”

Others reported, “they sent fighter planes up and I watched them in groups approach it and then turn away. There were shooting at it but it didn’t seem to matter. It was like the Fourth of July but much louder. They were firing like crazy but they couldn’t touch it. I’ll never forget what a magnificent sight it was. Just marvelous. And what a gorgeous color!”

Caught by the searchlights and captured in photographs, was an object large enough to dwarf an apartment house. Experienced lighter-than-air dirigible specialists doubted it could be a Japanese blimp because the Japanese had no known source of helium, and hydrogen was much too dangerous to use under combat conditions.

The battle lasted for several hours as searchlights scanned the skies and anti-aircraft guns rained ammunition into the air (and down onto the City). Much of the firing appeared to come from the vicinity of aircraft plants along the coastal area of Santa Monica, Inglewood, Southwest Los Angeles, and Long Beach.

The primary object that triggered the air raid alarm had drawn 1430 rounds of ammunition from the coast artillery, to no effect. When it moved at all, the object had proceeded at a leisurely pace over the coastal cities between Santa Monica and Long Beach, taking about 30 minutes of actual flight time to move 20 miles; then as suddenly as it appeared, it disappeared from view.

After the event, the conclusions drawn by the various branches of the military differed greatly. The Navy immediately concluded that the event was nothing more than a false alarm. The Army on the other hand, concluded that at least four objects were indeed travelling over the skies of Los Angeles. A newspaper report titled “The Army Says Alarm Real” was released the next day. It said:

Overshadowing a nation-wide maelstrom of rumors and conflicting reports, the Army’s Western Defense Command insisted that Los Angeles’ early morning blackout and anti-aircraft action were the result of unidentified aircraft sighted over the beach area. In two official statements, issued while Secretary of the Navy Knox in Washington was attributing the activity to a false alarm and “jittery nerves,” the command in San Francisco confirmed and reconfirmed the presence over the Southland of unidentified planes. Relayed by the Southern California sector office in Pasadena, the second statement read: “The aircraft which caused the blackout in the Los Angeles area for several hours this a.m. have not been identified.” Insistence from official quarters that the alarm was real came as hundreds of thousands of citizens who heard and saw the activity spread countless varying stories of the episode. The spectacular anti-aircraft barrage came after the 14th Interceptor Command ordered the blackout when strange craft were reported over the coastline. Powerful searchlights from countless stations stabbed the sky with brilliant probing fingers while anti-aircraft batteries dotted the heavens with beautiful, if sinister, orange bursts of shrapnel.

The command in San Francisco confirmed and reconfirmed the presence over the Southland of unidentified planes. Relayed by the Southern California sector office in Pasadena, their statement read: “The aircraft which caused the blackout in the Los Angeles area for several hours this a.m. have not been identified.” They could not explain what they were but surmised that they were small light aircraft launched from Japanese submarines. Their report was submitted and accepted by the United States War Department. None admitted that any enemy aircraft were shot down and none explained why none had been shot down.

Military leaders that had seen objects in the skies during the battle subsequently changed their stories and instead claimed that what they saw was simply smoke from the anti-aircraft guns. Despite the barrage of American antiaircraft fire, none of these objects were brought down, although several homes and buildings were destroyed, and six civilian deaths were attributed to the barrage. Considering the carnage, the military’s explanation was meager. U.S. Navy Secretary Knox even denied that any aircraft had been over the city; he called the incident a false alarm due to war nerves.

The local press, needless to say, did not take this very well. The Long Beach Independent noted that: “There is a mysterious reticence about the whole affair and it appears some form of censorship is trying to halt discussion of the matter.” It is noteworthy that for thirty years until the release of the Marshall memorandum, the Department of Defense claimed to have no record of the event. Five years before Roswell, the military was already learning to clamp down on UFOs.

After the conclusion of the war, the Japanese stated that they had not sent any planes over the area at the time of the battle. In 1983, in an explanation eerily reminiscent of the earlier Roswell explanation,  the Office of Air Force History concluded that an analysis of the event laid the blame on weather balloons.  In 2011, a TV show duplicated the event using large spotlights and live ammunition and concluded that the object in the photographs had to have been a solid vehicle of some sort and that a weather balloon would have been easily shot down.