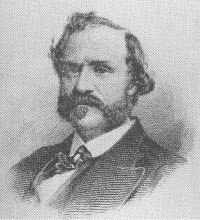 John Worrell Keely, a carpenter and mechanic from Philadelphia, announced in 1872 that he had discovered a new means of power production – the means to tap etheric energy. During this age, most physicists believed that all of space was filled with luminiferous ether rather than void, empty space. As it turned out several decades later, this theory was discounted by Einstein’s theory of relativity.

Keely’s idea prompted a lot of interest and he was able to persuade a dozen engineers and capitalists to invest in the idea. With capital of over one million dollars, primarily from wealthy New York and Philadelphia businessmen, Keely formed the Keely Motor Company in 1872. He quickly began purchasing the materials necessary for building a motor based on his theories.

It was not long before Keely constructed his first etheric generator. He demonstrated the amazing device to audiences in 1874 in Philadelphia at 1422 North Twentieth Street. Keely blew into a nozzle for 30 seconds and then poured five gallons of tap water into the same nozzle. After some adjustments, the pressure gauge indicated pressures of 10,000 pounds per square inch. Keely proudly announced that the water had been disintegrated and ether liberated inside the generator which powered the machine. One spectator at the demonstration announced, “Great ropes were torn apart, iron bars broken in two or twisted out of shape, bullets discharged through twelve inch planks, by a force which could not be determined.”

Keely told the crowd that his invention would make other forms of power obsolete. A quart of water would be enough to power a train from Philadelphia to San Francisco and back. A gallon would propel a steamship from New York to Liverpool. “A bucket of water has enough of this vapor to produce a power sufficient to move the world out of its course.”

Keely’s company took off quickly after this. He lived in a high style befitted any head of a major corporation. He continued to collect investor money and plowed the invested money into new research equipment. He kept his secret tightly guarded.

Keely did most of the construction and experimentation himself. When questioned, he replied that he could simply not entrust his secret to those who could not or would not understand. His backers were duly impressed as he looked with condescending pity on those who appeared to not understand. Skeptics noted whimsically that the Keely machine could never be made a practical machine because it would apparently would not work unless Keely was present.

Keely’s work produced new inventions at a slow pace. To keep up the spirit of stockholders, Keely often staged public demonstrations. He was a master showman. He demonstrated a marvelous machine, a “vibratory engine” or “hydro-pneumatic pulsating vacuo-engine.” It was a work of the machinist’s art, made of gleaming brass and copper. The engine was attached to another machine called a “liberator,” a complicated array of brass wires, tubes and tuning forks. He continued to proclaim that he was capturing the “latent force” of nature, the vibratory energy of the illusive ether. He used new terms such as sympathetic equilibrium, quadrupole negative harmonics, and etheric disintegration. He explained (in vague terms) that musical tones could resonate with atoms and with the ether itself. He often used musical instruments to start his demonstrations. A century later, some would use these explanations as evidence that Keely was actually ahead of his time, anticipating the theory of quantum mechanics.

But alas, the slow pace of progress eventually disillusioned stockholders. They began to withdraw support at Keely’s experiments suffered repeated delays. He resisted investor’s demand to produce some sort of marketable product. Stockholders were not happy with Keely’s insistence that more experimentation was needed to “perfect” the machines. Fortunately, when nearing bankruptcy, Keely acquired a wealthy backer, Mrs. Clara S. J. Bloomfield-Moore, the widow of a Philadelphia paper manufacturer.

Bloomfield-Moore advanced Keely over $100,000 for expenses and paid him a salary of $2,500 per month. She promoted Keely in journals and books. She even suggested Keely share his secret with Edison and Tesla to hasten its development. Keely refused but he did allow the scientists to observe his demonstrations.

E. Alexander Scott, an electrical engineer, witnessed such a demonstration. When Keely showed him the etheric power causing a weight to rise and fall in a closed flask of water, Scott was unimpressed. Keely used the sound from a zither to activate the globe liberator which then transmitted the etheric force through a wire to the water container. Scott suspected the weight was hollow, so that the slightest change of water pressure could cause it to rise or fall, just as a Cartesian diver. The wire, he guessed, was a hollow tube transmitting air pressure to the water chamber. To counter this suggestion, Keely cut a ways into the wire with a file to prove it solid. But Moore surreptitiously picked up a scrap piece of similar wire in the workshop and later found that it did have a very fine, hollow center. The Scientific American magazine followed Keely’s career with some amazement and amusement. But they were not impressed, reporting that all the demonstrations they had witnessed could easily have been produced with hidden sources of compressed air.

Keely continued his research for another fourteen years, occasionally staging public demonstrations to placate impatient stockholders. As the press begin to hammer Keely as a fraud, it was decided that a scientific standoff would solve the matter once and for all. Two scientists were invited to view the demonstration and debate the results. Physicists Lascelles-Scott and engineer Alexander Scott both viewed the machine in action together. It was suggested that one particular wire be cut as it could potentially be hollow and used to drive compressed air into the machine. Keely flatly refused. Mrs. Moore, shaken by the refusal, reduced Keely’s salary to $250 per month. Angry stockholders sued Keely for refusing to divulge his secret. He was sent to jail briefly for ignoring a court order to reveal the secret to his investors.

The Death of Keely Reveals Secrets? 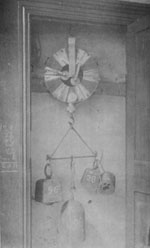 Keely died on November 18, 1898. Skeptics and newspapers poured through his lab and conducted a careful examination of what equipment they could find (several pieces of Keely’s equipment mysteriously vanished and was presumed taken by “believers” intent on continuing his work). A Boston electrician, T. Burton Kinraide, removed the engine to his home at Jamaica Plains. Some of the apparatus ended up in England. No one could make it function as it had in Keely’s laboratory. The secret was not in the machines; the secret was in the laboratory building itself. Engineer Alexander Scott and Mrs. Moore’s son, Clarence, examined the building, accompanied by press and photographers. False ceilings and floors were ripped up to reveal mechanical belts and linkages to a silent water motor in the basement (two floors below the laboratory). A system of pneumatic switches under the floor boards could be used to turn machinery on and off. A three-ton sphere was found in the basement, apparently a reservoir for compressed air. The walls, ceilings and even apparently solid beams were found to have hidden pipe work. Hidden electrical wiring was found in the walls. The public and investors had been duped, or so it seemed…

Keely’s workers came forth and explained that the piping was used in earlier experiments but not in the later ones and that in fact, they were inadequate to have operated at the pressures indicated by the mysterious machine. They brought forth dozens of witnesses who admitted that Keely had freely shown and demonstrated the huge reservoir located in the basement. They claimed that the electrical wire was installed to run a burglar alarm. The various motors and switches were used in the construction of the mysterious machines, not to power them.

Stripping the process of all technical terms, it is simply this: I take water and air, two mediums of different specific gravity, and produces from them by generation an effect under vibrations that liberates from the air and water an inter atomic ether. The energy of this ether is boundless and can hardly be comprehended. The specific gravity of the ether is about four times lighter than that of hydrogen gas, the lightest gas so far discovered.

Woman dies for 27 minutes before being revived – unable to speak, her first written message will send chills down your spine.

After more than 300 years, mysterious Devil’s Letter penned by possessed nun is deciphered at last

Translation of 1,200-year-old Egyptian manuscript proposes Jesus could change his appearance and shape at will