The Lost Island of Hybrasil 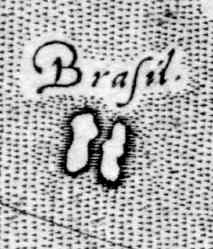 Located in the Atlantic ocean just west of Ireland, the mysterious island of Hy-Brasil (also documented as Hy-Brazil, Hybrasil, Brazil Rock, Hy-Breasal, Hy-Breasil, Brazir, and other variations) is shown on maps as early as 1325 and as late as 1872. Although Hy-Brasil can be found on many ancient maps, no island exists in our modern day and no historical documents were recorded to indicate where or what happened to the island. The mystery of Hy-Brasil is that it simply disappeared without a trace.

The accounts of Hy-Brasil are similar to those of Atlantis but whereas Atlantis was reported by one or two ancient historians, Hy-Brasil has been documented in many first person accounts. Thought to be the home of a highly advanced civilization led by an enclave of high priests, accounts of Hy-Brasil tell tales of advanced technologies, giant cattle and other domestic animals, and city towers and streets topped with gold. Led by priests who proclaimed to have a universal knowledge of the universe, the citizens of Hy-Brasil were reported to be highly intelligent and wealthy beyond imagination.  That the island was difficult to find is not hard to envision.  Legends of Hy-Brasil tell of an island that was shrouded in fog for much of the time with only short, brief appearances once every seven years or so.

The location of Hybrasil 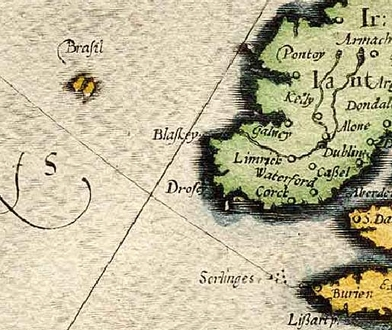 Maps and documented descriptions from expeditions from the 1300’s to the 1800’s describe the island’s location in great detail. The earliest appearance of the island was on a map created in 1325 by Genose cartographer Dalorto. Dalorto placed the island just west of Ireland. Saint Barrind and Saint Brendan also discovered the island on their voyages and were so impressed by its riches that they referred to Hy-Brasil as “The Promise Land”.  All reports and maps of Hy-Brasil show the island to be an almost perfect circle with a river running east-west across the island.

Captain John Nisbet of Ireland visited the island in 1674. Nisbet’s crew were sailing when a mysterious, dense fog settled on their ship. When the fog suddenly lifted, they found they were dangerously close to a rocky shore. A quick glance at the nautical charts showed the island to be the legendary island of Hy-Brasil. Nisbet and his crew anchored the ship and rowed a small boat to the shores of the island. They spent a day exploring the island and returned with gold and silver that they claimed was given to them by the inhabitants. As a result, a second ship was sent on an expedition to the island. Captained by Alexander Johnson, the second set of adventurers also found the island and confirmed Nisbet’s stories.

The last documented sighting of Hy-Brasil was in 1872 by Robert O’Flaherty and T.J. Westropp. Westropp had visited the island on three previous occasions and was so enthralled with Hy-Brasil, he brought his family with him to see the wondrous isle in person. O’Flaherty and Westropp’s logs indicate that they spotted the island and in stunned silence, watched as it vanished before their eyes.

Are Hy-Brasil and Atlantis One and the Same?

Modern day researchers and archeologists have searched for Hy-Brasil and note that in the location west of Ireland, there are many shallow areas of water in an area called Porcupine Bank, that appear to have been an island at some point in time.

In 1980 Sgt Jim Penniston was stationed at Brentwaters military base. During the UFO incident in Rendlesham Forest, he claims that he touched a UFO and telepathically received a message in the form of binary code, which he wrote down in a small note book shortly after the incident, telling no one about it for three decades.

Programmer Nick Ciske, hired by the History Channel, deciphered the binary code and discovered that it contained navigational coordinates of an area off the west of Ireland. The coordinates lay in the exact location that ancient cartographers mapped the island of Hy-Brasil.

The mysterious Nazca Lines of Peru