Up until 1994, there existed, just north of Kowloon Bay, a bizarre city in Hong Kong named Kowloon Walled City. Over time the veritable lawless (and unclaimed by any government) Kowloon Walled City, became a curious stack of cheaply constructed boxes through which ran a maze of dark alleys and exposed pipe and wiring and housed drug dealers and addicts, pimps and prostitutes, organized gangs, gambling dens, criminal headquarters, and private citizens all living together in a tangled mess of humanity. Only 6 ½ acres in size, it contained over 30,000 people giving it a population density of over 1 million people per square mile, all living on top of each other in cheaply constructed dwellings with no electrical or water supply, in an enclosed and isolated city that even the federal police were afraid to enter.  In order to comprehend the bizarreness of Kowloon Walled City, you have to see it for yourself.

Transformation from a fort to a crime-ridden city

Kowloon Walled City began in 1810 as a Chinese military fort built in an area that had been a trading post for many centuries. A tall stone wall was added around the fort in 1847. In 1898, when Britain was handed Hong Kong, the Kowloon Fort was not included in the lands ceded to Britain by treaty. Although Britain claimed ownership, the fort was ignored and over time, local citizens and foreign refugees settled inside the walled compound. With no guidance or leadership governing the area, crime spread as prostitutes, drug addicts, and other criminal elements moved in.

During World War II, Japan destroyed the wall that surrounded the area (they used the stone to help build the foundation for a new airport located on Kowloon Bay) and by War’s end, China announced their intent to reclaim rights to the Walled City. Assuming Chinese ownership meant better security, more refuges began pouring into the compound, constructing shoddy homes for protection from the elements. China never acted on their claim and Britain continued to ignore the area. The Triads gang moved in and began organizing criminal activities within the city’s walls. Lacking any other leadership, the Triads became the de facto leaders of the city as brothels, pornographic theaters, gambling parlors, and opium dens sprouted throughout the city.

By the 1960’s, commercial contractors smelled potential profits and retaining the same basic layout as the original fort’s compound, began building large multi-story structures for lease to poor residents. These structures, up to 14 stories high, were often built on no more than cement poured in a trench with each building attached to the structures next to them for support. Within a decade, the formerly low-rise City consisted almost entirely of 10-14 story buildings. Engineers noted that if one structure fell, they all would come down.

Sometimes the buildings had to be turned at odd angles to fit into the available space. Space was maximized by building wider upper floors, caged balconies that overhung the street below, and rooftop additions. There were no roads in the city – only twisted alleys, four feet wide, connecting the buildings to each other. With only the four original stone entrance points into the area, the danger of fire was a concern amongst residents. 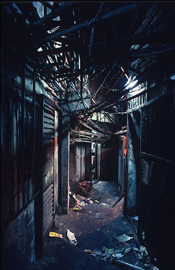 The homes were small, one-room structures about 10 by 20 feet in size, with no water, electricity, or sewer facilities. Over time, the city became a crowded and tangled network of buildings, alleys, and staircases. Alleys were often only 3-6 feet wide with poor lighting and drainage. The rooftops were covered with antennas, clotheslines, water tanks, and garbage. Where small gaps existed between the buildings, an informal network of staircases and passageways, sometimes nothing more than a wooden ladder, were built on the upper levels in order to join the buildings together. The structures were so dense, and so close together that virtually no sunlight entered the bottom floors. It was said that on the upper floors, you could travel from one end of the city to the other without ever touching the ground.

This building construction continue well into the 1970’s when eight municipal pipes were run into the city to provide water for residents who traveled to the ground floor to get their water from one of the eight taps. Criminal gangs routed stolen electricity into the area through a dangerous, exposed network of wires attached to the ceiling of the alleys and running in, through, and over the existing housing structures. The bundles of unprotected wiring on the ceiling were so thick; you could not stand upright when walking through the narrow alleys. Wiring for TV antennas was often draped over the side of the building, passing by other tenant’s windows, and into the recipient’s home. With no easy way to reach the ground level, tenants dumped garbage and waste materials out of their windows onto the structures below and with little or no ventilation, the city stunk of putrid water and rotting garbage. 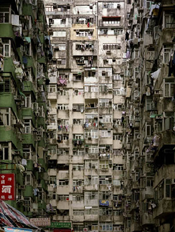 As crime leveled out, occupants continued to flood into the city seeking cheap, affordable housing, Within its 6 ½ acre borders, the population topped 33,000 by 1987. Unlicensed doctors and dentists moved in knowing that they could operate in the Kowloon Walled City without threat of prosecution. Illegal clinics, offering cheap or sometimes, legally prohibited medical attention, blossomed and filled the bottom floors of the City.

Not all businesses were illegal though. Residents began opening legal businesses manufacturing items such as plastic products, prepared food items, and clothing, often running the factories inside their one-room homes. Food stores, barbershops, restaurants, and clothing stores were opened in residential rooms that faced the many alleys and walkways. The owners would often partition their single room homes with one half being used to sleep in and the other half, that faced the alley, used as a small business front.

As residents settled in, charities, churches, and schools were introduced to the city. The Hong Kong government began providing limited services such as mail delivery and occasional garbage collection. Residents began using the rooftops, the only place sunlight could touch, as gathering places where parents could relax and children could play.

By the late 1980’s, the British and Chinese governments found the City to be increasingly intolerable. The quality of life and particularly the sanitary conditions were far behind the rest of Hong Kong. The decision to tear down the Kowloon Walled City was made on January 14, 1987 and tenants were forcibly evicted between November 1991 and July 1992. Demolition of the City concluded in April 1994 leaving only a temple and remnants of the front gate.

Today a park lies at the point where the old City was found, along with pieces of the City’s gate and some cannons held over from the original fort.

Below is a retail store facing a narrow alley in Kowloon Walled City.  Residents often ran businesses in the front half of their one-room home and slept in the back half. 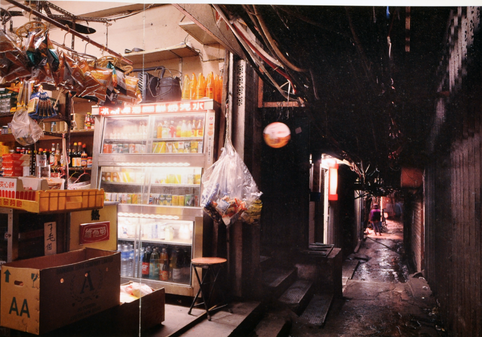 A rare glimpse of sunlight visible at the top of a Kowloon alley.

Kowloon Walled City from a park across the street.  With only four entrances to the city, and no roads or streets running through it, residents rarely ventured outside its walls. 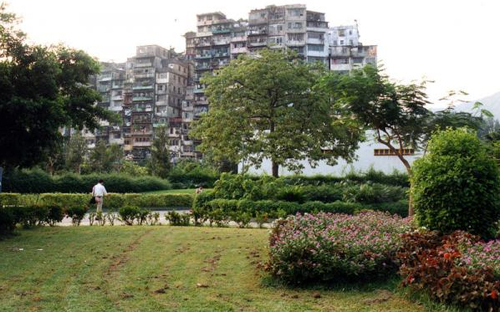 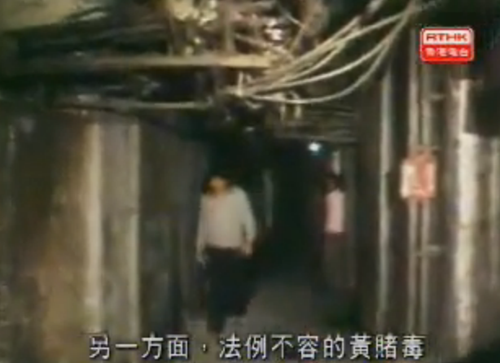 A view of Kowloon Walled city from a nearby street corner.  Life outside the city was as normal as any other Chinese city but Kowloon itself was an island of hopelessness. 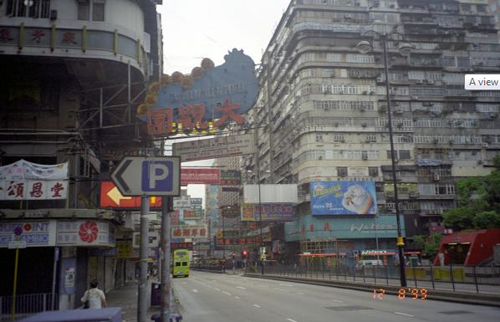 The balconies of homes in Kowloon Walled City took advantage of available space (empty air) and were built outward, overhanging the street outside the city. 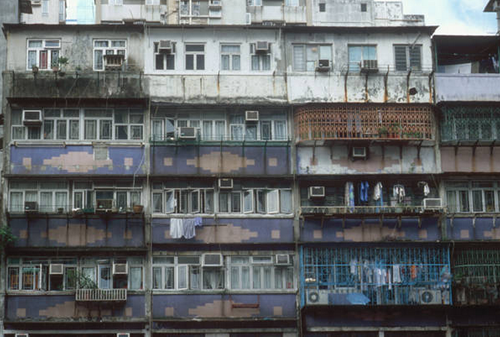 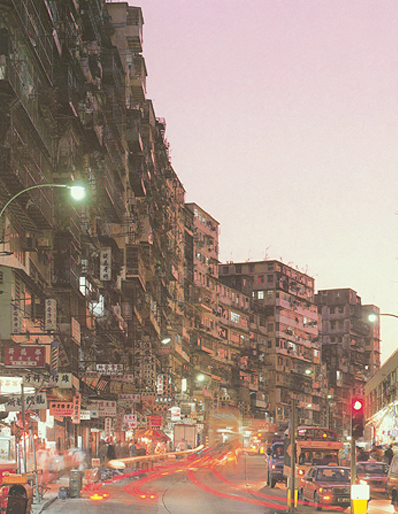 Homes located on the edges of Kowloon Walled City were prime real estate compared to the inner located homes.  Outside homes often ran businesses facing the street.  Many of the unlicensed and illegal doctors and dentists operated in these shops. 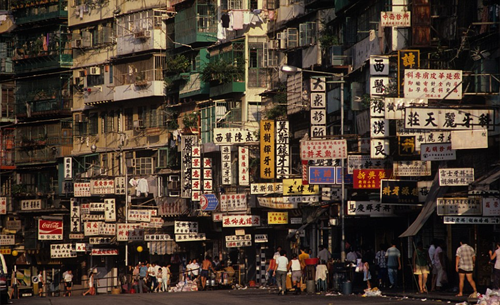 A dark and dingy Kowloon Walled City ally right before the city was demolished.  Note the mass of wiring running along the ceiling. 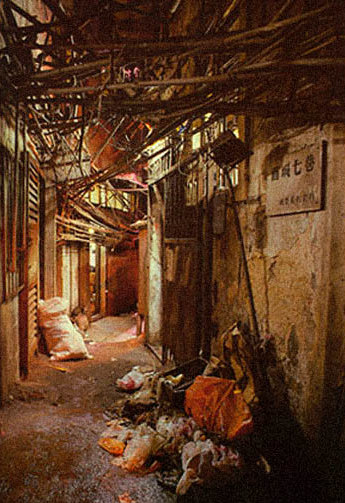 Residents used balconies to hang clothing to dry.  If you look closely you’ll see wiring running down and over some of the balconies.  Antenna wiring was run from the roof, over the edge of the building, and down into resident’s homes. 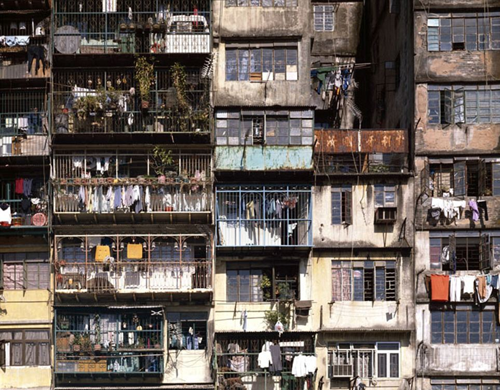 There were only eight water taps in the city and all were located on the ground level.  Residents had to travel to the first level to obtain water in whatever containers they could manage to haul with them.  Often residents washed clothing, dishes, even hair directly from these taps as other residents waited in line for their turn. 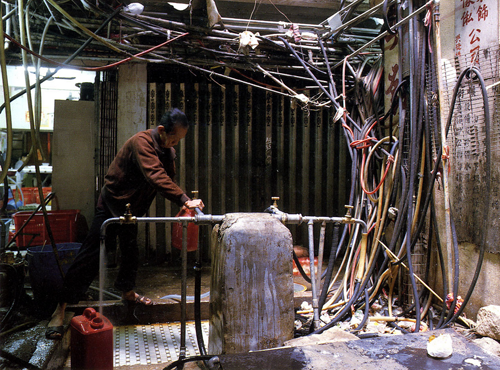 With only four entrances and no roads to ease travel in and out of the city, carrying garbage outside was not an option.  Residents simply dumped garbage out of their window onto the roofs of the homes below them. 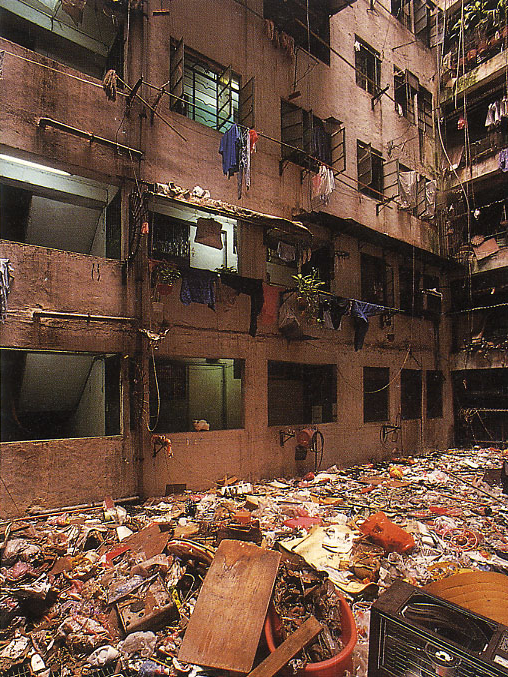 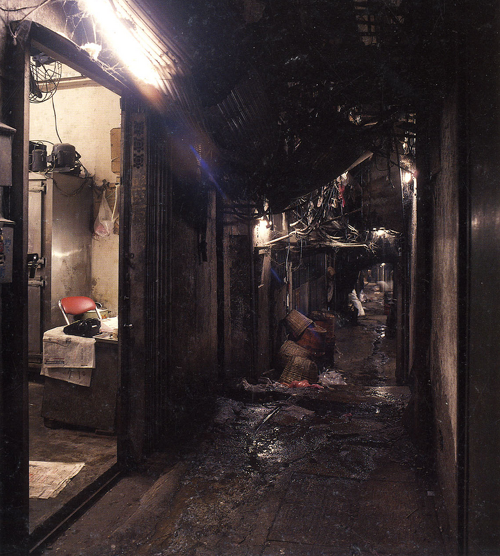 The rooftops were often used as a gathering place for families.  The only source of sunlight in the entire city, children often played and rode bikes on the rooftops. 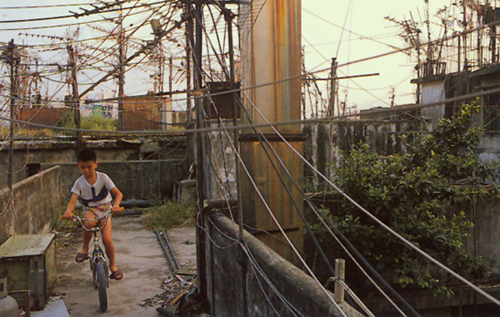 A bird’s eye view of Kowloon Walled City early in its development. 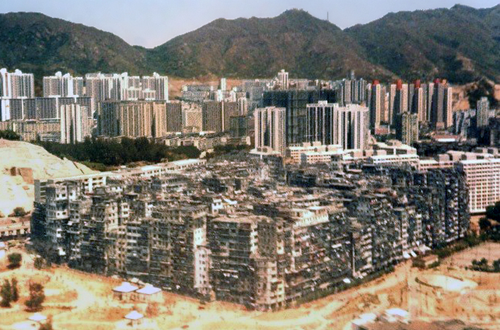 An early aerial view of Kowloon Walled City during the 1970’s.

A store in Kowloon Walled City.

A store in Kowloon Walled City.

A store in Kowloon Walled City and tiny residence in back.