Fort Knox – where America keeps its most treasured possessions (and gold!) 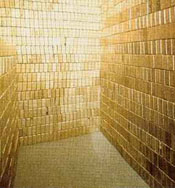 The United States Bullion Depository, commonly called Fort Knox, is a fortified vault building located near Fort Knox, Kentucky, which is used to store a large portion of United States official gold reserves and occasionally, other precious items belonging or entrusted to the federal government. The United States Bullion Depository holds about 4,603 tons (4,176 metric tons) of gold bullion (147.399 million troy ounces). It is second in the United States only to the Federal Reserve Bank of New York’s underground vault in Manhattan, which holds about 5,000 metric tons of gold in trust for many foreign nations, central banks and official international organizations.

Before the election of Franklin D. Roosevelt in 1932, gold coins had circulated freely in the United States as legal money, and gold bullion was owned by banks and other private entities. In early 1933, as part of the New Deal, the U.S. Congress enacted a package of laws which removed gold from circulation as money, and which made private ownership of gold in the U.S. (except for coins in collections or jewelry such as wedding rings) illegal. All gold in circulation was seized by the government in exchange for dollars at the fixed rate of $20.67 per ounce. Owners of gold bullion in the U.S. were also required to trade it for other forms of money. All of this left the government of the United States with a large amount of gold metal, and no place to store it. 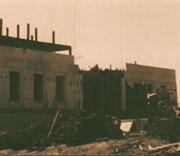 In 1936, the U.S. Treasury Department began construction of the United States Bullion Depository at Fort Knox, Kentucky, on land transferred from the military. The Gold Vault was completed in December 1936 at a cost of $560,000, or about $7.5 million in 2007 dollars. The site is located on what is now Bullion Boulevard at the intersection of Gold Vault Road.

The first gold shipments were made from January to July 1937. The majority of the United States’ gold reserves were gradually shipped to the site, including old bullion and more newly made bars made from melted gold coins. Some intact coins were stored, as well. The transfer of the bullion required 500 rail cars and was sent by registered mail, protected by the U.S. Postal Inspection Service.

During World War II, the repository held the original U.S. Declaration of Independence and U.S. Constitution. It also held the reserves of several European countries and several key documents from Western history; for example, it held the Crown of St. Stephen, part of the Hungarian crown jewels given to American soldiers to prevent them from falling into Soviet hands. The repository also held one of four known copies (exemplifications) of Magna Carta, which had been sent for display at the 1939 New York World Fair, and when war broke out, was kept in America for the duration. 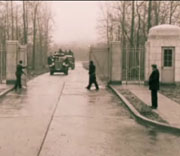 Below the fortress-like structure lies the gold vault, which is lined with granite walls and is protected by a blast-proof door that weighs 22 tons. No single person is entrusted with the combination to the vault. Various members of the Depository staff must dial separate combinations known only to them. Beyond the main vault door, smaller internal cells provide further protection.

The facility is ringed with several fences and is under armed guard by officers of the United States Mint Police. The Depository premises are within the site of Fort Knox, a United States Army post, allowing the Army to provide additional protection. The Depository is protected by numerous layers of physical security, alarms, video cameras, armed guards, and the Army units based at Fort Knox, including Apache helicopter gunships of 4/229 Aviation based at Godman Army Airfield, the 16th Cavalry Regiment, training battalions of the United States Army Armor School, and the 3rd Brigade Combat Team of the 1st Infantry Division (totaling over 30,000 soldiers, with associated tanks, armored personnel carriers, attack helicopters, and artillery). 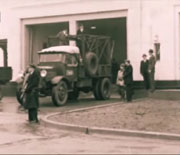 The depository also holds monetary gold coins. It also holds several specimens of Sacagawea Dollar coins made out of 22kt (91.6% pure) gold from blanks that are used to strike the $25 half-ounce American Gold Eagle bullion pieces made for an unknown project. The 1933 Double Eagle was also a temporary resident after transfer from 7 World Trade Center in July 2001, until its sale in July 2002 for $7.59 million. Sometime in 2004, 10 additional allegedly stolen 1933 Double Eagles were transported to Fort Knox for safekeeping.

Not all the gold bars held in the depository are of exactly the same composition. The mint gold bars are nearly pure gold. Bars made from melted gold coins, however, called “coin bars,” are the same composition as the original coins. Unlike many .999 fine gold bullion coins minted in modern times for holding-purposes today, the coin alloy for pre-1932 U.S. coins, which were intended for circulation, was a much tougher and wear-resistant .900 fine alloy (balance copper) derived historically from 22-carat crown gold (a similar alloy consisting of .917 gold, .030 silver, .053 copper is still used in modern U.S. American Gold Eagle bullion coins).

The United States holds more gold bullion than any other country, with about 2.37 times that of the next leading country, Germany.

A popular and recurring conspiracy theory, as alleged by Edward Durrell, Norman Dodd, Peter Beter and others, claims that the vault is mostly empty and that most of the gold in Fort Knox was removed to Jerusalem in the late 1960s by President Lyndon Johnson. In response, on September 23, 1974, Senator Walter Huddleston of Kentucky, twelve congressmen, and about 100 members of the news media toured the vault and opened various cells and doors, each filled with gold. Radio reporter Bill Evans, when asked if it seemed like the gold might have been moved in just for the visit, replied that “all I can say is that I saw gold there” and that it seemed like it was always there. Additionally, audits of the gold by the General Accounting Office (in cooperation with the United States Mint and the United States Customs Service in 1974 and the Treasury Department) from 1975-1981 found no discrepancies between the reported and actual amounts of gold at the Depository. However, the audit has been described as a peculiar process because it was only a partial audit done over an extended period of time. The report states only 21 percent of the gold bars were audited as of 1981 (the audit report’s issue date) and that the audit has “covered more than 212.7 million fine troy ounces of gold” which “represents over 80 percent of the total amount of United States-owned gold of 264.1 million fine troy ounces.” The Fed claims that a small amount of gold is removed for regularly scheduled audits to ensure the purity matches official records.

No additional inspection or audit has been made for almost 30 years.